Do Not Touch the Funnel Cloud 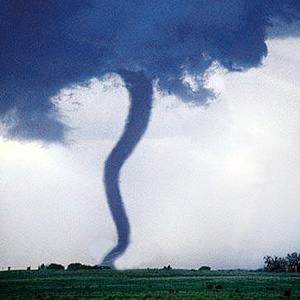 "The suck zone: it's the point, basically, at which the twister... sucks you up. That's not the technical term for it, obviously, but..."

Tornadoes. One of the deadliest and most terrifying manifestations of nature's fury. They can strike anywhere at any time, claim hundreds of lives each year, and cause billions in widespread property damage.

Unless, of course, you live in the land of make-believe. There, only the visible funnel cloud is actually capable of damaging anything, and then, they usually don't even stir up any debris. Never mind that in real life the funnel cloud is only the center of the tornado, with wide radius of 300+ MPH ground winds pulling air (and earth and cows and so forth) into the funnel. Forget the fact that even an EF-1 tornado (on a scale of 0 to 5 in power) can rip the roofs off buildings and turn cars into flying battering rams, not to mention that an EF-5 tornado's damage level is scientifically described on the scale as "explosive" (though it needs to be noted that tornadoes don't actually make things explode). As long as you don't touch the funnel cloud, you're in the clear every time. Yep.

Is trying this in real life dangerous? You'd better believe it. No one can come nearly as close to a real tornado as characters do on TV without already having been sucked up into it—or bludgeoned by one of the big heavy objects circling in the air around it. In reality, if you're less than a mile away from the storm, you're in trouble. Big trouble.

Though this trope runs on some heavy use of Artistic License, it's well-documented that tornadoes can be... capricious in their damage, destroying one house but leaving the one next door completely untouched, due to multiple vortices inside the funnel. Still, would you bet your life and safety on winning this meteorological lottery? Didn't think so...

Uses the same "scientific" principles as Convection, Schmonvection, which basically state that so long as you don't touch it, it can't hurt you. See also Black Holes Suck, which is this trope In Space!

Examples of Do Not Touch the Funnel Cloud include: