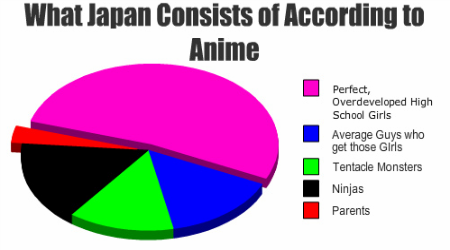 The country of Japan, but portrayed as a world that works like what Anime taught us.

In western works, it might serve as a parody of the anime fandom in general. In Japanese works, it might be a jab at Occidental Otaku who seem to actually believe in this, or lampshaded to emphasize that this particular work is more realistic than that.

The most common examples are:

Due to the Lowest Common Denominator, it might also include other Japanese pop cultural references, that are not really anime-specific, such as Ninjas, Kaiju or the Yakuza.

This is a part of the Hollywood Atlas, like Eagle Land, Igloo Land, Yodel Land and the Land of Dragons. Thirty Seconds Over Tokyo is similar, but unfiltered (or at least less so) through the lens of anime.

Not be confused with the French magazine Animeland

Examples of Animeland include: