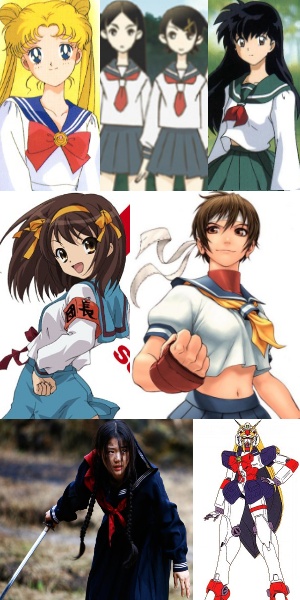 Everyone looks good in a Sailor Fuku. Even mechas.[1]

The Sailor Fuku is to the characteristic "sailor suit" schoolgirl uniforms worn in Japan. Sailor fuku uniforms are actually based on late 1800s early/1900s "rational dress" girl's fashions (themselves based on European naval uniforms), which progressed into the "middy" dress that was seen in the west till at least the 1920s with Sears offering over dozens of variants, both as one piece and separate tops, for children, teenagers, and even some for adult women and even some articles appearing in the 1941 Montgomery Ward Catalog. Despite their western history, the prevalence of sailor-suited school girls in anime, manga, and other forms of Japanese media show how iconic the sailor fuku is in Japan. This is true despite many Japanese schools having switched to more Western-patterned uniforms. However, there are some American schools that use Sailor Fuku.

Sailor-suit uniforms may be a vehicle for Fan Service as well, as the uniform skirts are often depicted as being unrealistically short. This alteration is so common that it is rarely commented on or questioned, though it may be off-putting to those who are not used to anime or manga based media. Uniforms may be altered in other ways to distinguish certain characters, especially ones considered particularly beautiful.

This is more a Japanese cultural trope than an Anime Trope but is found prominently in anime, especially on Joshikousei; compare the Western trope Catholic School Girls Rule.

It may depend on the region, but in Real Life as of the early 21st century the sailor suit (and the traditional male counterpart, the gakuran) has become largely the domain of middle/junior high schools, whereas high schools have shifted towards more fashionable or professional-looking styles of uniform, often with tailored blazers, vests, neckties, and plaid skirts. Elementary schools, if they have a uniform, tend towards collarless jackets and skirts with suspenders—and sometimes, students wear their gym uniforms during class and change into their formal uniforms when outside of the school or attending ceremonies.

In an inversion of a western trope, in the 70s and late 80s, the common image of a female delinquent had an extremely long skirt, but this appears less frequently these days..

See School Swimsuit for another type of Japanese uniform often used to a similar effect in media.

Compare School Uniforms Are the New Black, since some examples here have the uniform as their standard outfit.

Examples of Sailor Fuku include:

Retrieved from "https://allthetropes.org/w/index.php?title=Sailor_Fuku&oldid=1957390"
Categories:
Cookies help us deliver our services. By using our services, you agree to our use of cookies.