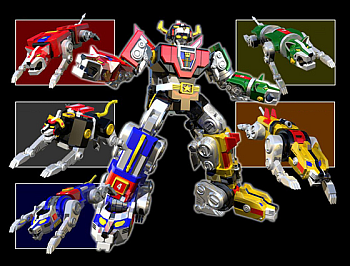 When two or more independent Mecha can combine to make another, larger mecha. It can be a decent way to hide a really big robot in plain sight, by breaking it up into pieces.

After the merge (accompanied by the stock Transformation Sequence), the new mecha will have powers and abilities greater than the sum of its parts. Combining Mecha are frequently a metaphor for Team Spirit and/or The Power of Friendship because of this.

Who controls the combined form, and where the crew ends up after the merge, also varies. In some settings (such as Voltron) the crew remains in their separate individual cockpits (with the leader responsible for most of the robot's control), while other settings like Super Sentai and Power Rangers transfer the heroes to a central "bridge" area in the core of the mecha and they control the robot as a group (again, usually under the leader's direction).

In most cases each mecha comprises one specific piece of the resulting robot, with the group's leader (i.e. The Hero) forming the robot's head or torso in the process—after all, the leader is the 'head' of the group, so why not have them become the literal head of the combined form? This also eliminates the requirement for more than one Transformation Sequence, since the component mecha will always form the same result in the same manner. On the other hand, some mecha can mix-and-match their configurations to form any part of the combined robot, and it doesn't necessarily matter who forms which piece.

In many series, if a team of mecha is revealed to have a combined form, expect to see the individual mecha's abilities reduced to So Last Season status, with the mecha rarely used for anything other than their ability to combine. This is certainly the case with, for example, most Super Sentai and Power Rangers series, where once the team's Megazord is revealed (usually at the end of the Pilot Episode), they will never use anything less. (Probably because hiring People in Rubber Suits to fight the Monster of the Week is a lot less expensive than the Stop Motion or CGI required to animate individual mecha doing the same.)

In cases where the mecha are sapient beings with no outside pilot (such as Transformers), the resulting personality of their combined form is frequently some manner of collective consciousness formed by the component members—this merged mind is often the result of whatever its component members can actually agree on, usually resulting in little more than a mechanized Dumb Muscle whose vocabulary consists primarily of one-syllable words and who can only focus on one task at a time: For the good guys, this creates a Gentle Giant; For the bad guys, this simply results in breaking and smashing stuff. Lots of stuff. And killing people, don't forget the killing.

In any case, it's often unclear where the necessary parts to operate this new robot came from—all the physical implausibilties of Transforming Mecha apply, to a greater degree.

More often than not, the legs-and-feet component of a combining robot is not as cleverly disguised as the other parts. It may appear as a giant, rectangular machine with obvious foot-shaped parts protruding from behind. In contrast, the head of the combining robot is almost always hidden in some sort of recess; in the Transformation Sequence, it usually emerges from said recess as a final step.

If the vehicle is a single thing to begin with but breaks apart to fight, you could be looking at Detachment Combat.

Examples of Combining Mecha include:

All of the following

Group of vehicles to giant robot

Group of vehicles to bigger vehicle

Several combinations, each of which has a distinct merged form.

A smaller mecha simply attaches to a larger one, usually as a weapon or a bit of armor.

Retrieved from "https://allthetropes.org/w/index.php?title=Combining_Mecha&oldid=1864337"
Categories:
Cookies help us deliver our services. By using our services, you agree to our use of cookies.