Everything About Fiction You Never Wanted to Know.
Jump to navigation Jump to search
/wiki/Go Nagaicreator 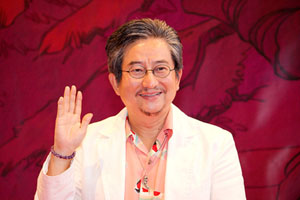 Nagai began his career after he fell sick in college and believed he had colon cancer; he wanted to leave something to be remembered for. By the time he found out he did not have cancer, he was set on his career. Ironically his first efforts at getting published were sabotaged by his own mother! Fortunately, he caught the attention of Shotaro Ishinomori, (creator of Cyborg 009) who helped him get started. Nagai eventually funded his own company, Dynamic Productions. A 1980s OVA series, CB Chara Go Nagai World, was an Affectionate Parody of Nagai's works, with Super Deformed versions of his most famous characters interacting with each other.

Nagai is known for intentionally breaking taboos, and even his milder material has a humorously deranged quality to it. His early works got him in trouble with the PTA, and even today some of them can contain controversial material. Nevertheless, most of his TV work is technically safe in the interest of placating censors even in Latin America and Europe (though not the US).

Tropes common to many (not all) of Nagai's works:

Retrieved from "https://allthetropes.org/w/index.php?title=Go_Nagai&oldid=1744655"
Categories:
Cookies help us deliver our services. By using our services, you agree to our use of cookies.