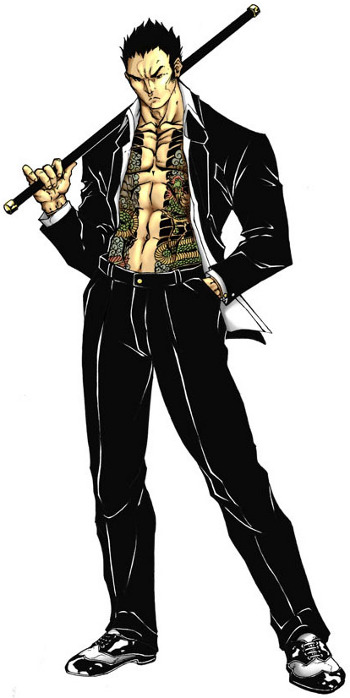 Japanese mobsters, often called "the Japanese Mafia" in the West, euphemistically as "anti-social organizations" and "violent groups" (暴力団, bōryokudan) or "the extreme path" (極道, gokudō) by most Japanese, and "charitable/chivalrous organizations" (任侠団体/仁侠団体, ninkyo dantai) by themselves. The term refers solely to the members of crime organizations, not to the organizations themselves, which may take many different names. The yakuza insist that their organizations originated in Robin Hood-style outlaw groups and vigilante groups during Japan's feudal era, but scholars believe that they are in fact descended from roving bands of Ronin who harassed and extorted the local peasantry. Despite being stereotypical of Japan, yakuza are actually ethnically Korean in incredibly disproportionate values, being some 30% of the yakuza despite making up only 1% of Japan's general population.

Yakuza resemble The Mafia in that they are very organized crime syndicates, with strict codes of behavior and etiquette, and encompass many levels of ritual and formality. Unlike the Mafia and the Chinese Triads, though, they are not secret societies, and often operate openly, even so far as to maintain offices and carry business cards. Like their Western counterparts, though, they derive most of their profit from extortion, protection rackets, human trafficking, and the like. Yakuza like to maintain that they provide a service to the community, which in return owes them both respect and money. A consequence of being ultra-violent while maintaining a strict honor code is that in fiction they sometimes get to have Samurai traits, or at least katana.[1]

The stereotyped yakuza character matches the real-world profile fairly closely: he is heavily tattooed (so identified with criminality that many bathhouses forbid people with tattoos on the premises), male, and may be missing a finger (either as a loyalty test or as punishment, contrary to myth however, plenty of anime was inspired by western animation and retains Four-Fingered Hands). He wears an expensive suit and dark sunglasses, and walks with a distinctive swagger that announces his profession. While he claims a benign interest in the community, he is as likely to be as violent and destructive as his Western counterpart, especially if he feels he is not receiving the respect he deserves.

Yakuza are so prominent in Japanese culture that they have even spawned an entire genre of films which are as distinct from western gangster films as the yakuza are from western gangsters. While many of these films are little known in the west, movies like Tokyo Drifter and Battles Without Honor and Humanity pioneered many tropes that western audiences have since come to associate with martial arts and action pictures, and their influence can be detected in productions as diverse as Kill Bill and Cowboy Bebop.

Female yakuza are very rare in the male-dominated Japanese society, but if one appears, she is definitely a Dragon Lady.

As Japan Takes Over the World is quite typical for the genre, expect Yakuza to to appear quite often in most cyberpunk fiction.

See also The Mafiya, The Mafia, The Irish Mob, The Triads and the Tongs, The Cartel, The Syndicate, Mafia Princess.

And then there's also the film The Yakuza and the videogame Yakuza, also known as Ryu ga Gotoku.

Retrieved from "https://allthetropes.org/w/index.php?title=Yakuza&oldid=1964004"
Categories:
Cookies help us deliver our services. By using our services, you agree to our use of cookies.