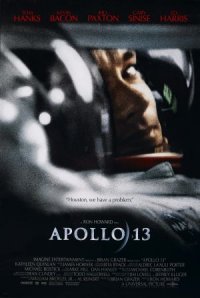 Houston, we have a problem.
—Jim Lovell

In 1970, the Apollo 13 was launched, headed for the moon. But this ill-fated flight would never reach its goal. Instead, its crew would have to handle another crisis - one which endangers not only the mission, but their very lives. But this movie is no sci-fi epic. Based on actual events, Apollo 13 depicts real history.

When an explosion rocks the service module, the crew soon realizes that the oxygen tanks aboard the Command Module Odyssey are leaking, forcing Mission Control to abort the landing. The crew shut down Odyssey and power up the Lunar Module Aquarius (which normally could only support two men for a few days) to act as a lifeboat as they slingshot around the dark far side of the moon. Only ingenuity and the ability to keep their wits about them will allow them to get home safely...

Based on Jim Lovell's book on his experience, Lost Moon. In an interesting example, he shot the book idea past publishers, publishers got excited and sent it to filmmakers who immediately started bidding on it, and then someone called Lovell and said Imagine Entertainment was going to make a movie based on it. He hadn't finished the book yet!

Director Ron Howard, producer Brian Gazer, and star Tom Hanks went on to produce the HBO miniseries From the Earth To The Moon.

Make sure you listen to the commentary track by the real Jim and Marilyn Lovell.

Tropes used in Apollo 13 include:

Hello, Houston, this is Odyssey. It's good to see you again.

CAPCOM: Aquarius, watch that middle gimbal. We don't want you tumbling off into space.
Jim Lovell: Freddo, inform Houston I'm well aware of the God-damned gimbals!
Fred Haise, Sr.: [calmly] Roger that, Houston.
Jim Lovell: I don't need to hear the obvious, I've got the frappin' 8-ball right in front of me!
INCO: Hey, we're on VOX!
CAPCOM: Aquarius, Huston. We have you both on VOX.
Fred Haise, Sr.: You want what, you want us to go to VOX?
CAPCOM: You have a hot mic, we are reading everything you say.

Walter Cronkite: ...And if anything else goes wrong, they'll be in real trouble.

Marylin Lovell: (arriving at NASA to watch it) Where's their broadcast?
Henry: All the networks dumped us. One of them said we make goin' to the moon as exciting as taking a trip to Pittsburgh.

Jim Lovell: Well... if I had a dollar for every time they've killed me in this thing [a flight simulator], I wouldn't have to work for you, Deke.

CAPCOM: Aquarius, watch that middle gimbal. We don't want you tumbling off into space.
Lovell: Freddo, inform Houston I'm well aware of goddamn gimbals.
Haise: Roger that, Houston.
Lovell: I don't need to hear the obvious...
FLIGHT: Andy (CAPCOM), we're on VOX.
Lovell: ...I got the frappin' eight-ball right in front of me.
CAPCOM: Aquarius, this is Houston. We've got you both on VOX.
Haise: You are what? You want us to go to VOX, Andy?
CAPCOM: You have a hot mic, we're reading everything you say.
Everything they were saying was going out over CAPCOM (and over broadcast if the Networks were picking up the feed), so understandably they were concerned about whether they had left their mic open again or not.

Jim Lovell: Guys, we are venting something into space.

Jim Lovell: Houston, we're getting our first look at the service module now. One whole side of the spacecraft is missing. Right by the high gain antenna, a whole panel is blown out. Right up, right up to our heat shield.

In order to enter the atmosphere safely, the crew must aim for a corridor just two and a half degrees wide. ... The reentry corridor is, in fact, so narrow that if this basketball were the Earth, and this softball were the Moon, and the two were placed fourteen feet apart, the crew would have to hit a target no thicker than this piece of paper.

Jim: I have trained for the Fra Mauro highlands, and this is FLIGHT SURGEON HORSESHIT, Deke!

Kranz: Failure. Is not. An option!

Sy Liebergot: It's- it's reading a quadruple failure - that can't happen... It's got to be instrumentation.

Gene Kranz: I want you guys to find every engineer who designed every switch, every circuit, every transistor and every light bulb that's up there. Then I want you to talk to the guy in the assembly line who actually built the thing. Find out how to squeeze every amp out of both of these goddamn machines. I want this mark all the way back to Earth with time to spare. We never lost an American in space, we're sure as hell not gonna lose one on my watch! Failure is not an option!

Lovell: Freddo, how long does it take to power up the LEM?
Haise: Three hours, by the checklist.
Lovell: We don't have that much time.