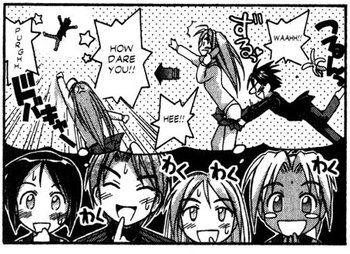 These girls know the routine.

The combination of a Dream Sequence and a Gilligan Cut, usually no more than a few seconds long, and commonly bookended by a Fade to White. Alice yells at Bob, "What am I, your maid?!". Cut to Alice cleaning the house in a French Maid Outfit. Cut to Bob's face—he's clearly just imagined the role, and Alice has just slapped him to snap him out of his imagination trance.

May be used to show what would happen If I Were a Rich Man. A more mundane (and stealthy) version is the Daydream Surprise. Very frequent in commercials. If someone else can see, that's Imagine Spotting. Someone who does this a lot is a Mr. Imagination. If Bob's Imagine Spot causes him to lash out in anger at Alice over something that only happened in the Imagine Spot, we've seen an Indulgent Fantasy Segue.

If the Imagine Spot is a something the character is supposedly remembering, it may be a Crazy Memory. If it winds up being less fantastical than you'd expect, it's a Fantasy Twist.

Examples of Imagine Spot include:

Retrieved from "https://allthetropes.org/w/index.php?title=Imagine_Spot&oldid=1817324"
Categories:
Cookies help us deliver our services. By using our services, you agree to our use of cookies.