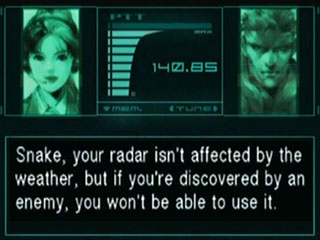 Snake can always count on Mei Ling to save his hide again and again.

A character or group of characters who, rather than accompany the hero into the field, offers assistance with information and technology from the other end of a phone. Alternatively, a sapient computer that travels with him, but is incapable of rendering assistance physically.

In the modern wired era, Mission Control can provide valuable field assistance by hacking into the local technology by remote, or using ROV's and other remote devices.

The opposite of his partner in the field in many respects. Most times, Mission Control is more intellectual than the heroes, being a planner and strategist rather than a doer. They prefer to sit back and plan, while the hero is brash and forward. If the hero is strong and invulnerable, Mission Control is weak and frail. Various other contrasts may also be built up: if the hero is the strong silent type, Mission Control will be cheerful and will crack jokes. This will often lead to some sort of friction between the two and Character Development as time goes on.

The defining characteristic is that the character provides banter, exposition, information and support, while the hero is still physically alone and isolated. Losing contact with Mission Control can be used as a plot element. Often the hero will mock his backup's unwillingness to risk it all in the field, and be punished when he loses their valuable help temporarily. He'll be all too glad when everything's back to normal, he's risking his neck and MC's back in his chair.

In some series, Mission Control makes up one half of a Spy Couple. If the hero is male, this character is often female, attractive, and in love with him. This type of portrayal is reminiscent of a fifties TV housewife. ("Stay here and mind the base, honey! And don't call unless it's important!")

If a series with a Mission Control runs long enough, they will inevitably be forced into a truly threatening situation. The hero could be captured (see All Up to You), baddies could invade their HQ (a Die Hard scenario ensues), or someone could just catch them off duty. Either the hero will coach them, in a role reversal, or they'll be held captive as a hostage and the hero will have to do his own thinking. Once in a while this results in the death of Mission Control, either we see the death but the hero has no idea, or we and they hear/see it but can't stop it. This often sets up a Dead Sidekick, or if it's in Flash Back, a Dead Little Sister revenge arc. May also fall into A Death in the Limelight.

Sometimes, the bad guy will hack the communications and impersonate mission control, using voice filters and CGI to fool the hero into doing his bidding.

Mission Control has become increasingly common in video games, to put a face and voice on otherwise boring mission objectives and briefings. In such games, as in long-running series, there is roughly an 80% chance (higher in cynical games, lower in idealistic ones) that the Mission Control character will be killed, kidnapped, threatened, have their frequency hijacked by the BigBad, or otherwise be rendered useless about halfway through the storyline.

'Mission Control' often overlaps with other character types by function or nature:

The Sitcom version, where the voice on the other end of the earpiece is Playing Cyrano, is Earpiece Conversation.

Examples of Mission Control include:

Retrieved from "https://allthetropes.org/w/index.php?title=Mission_Control&oldid=1886305"
Categories:
Cookies help us deliver our services. By using our services, you agree to our use of cookies.