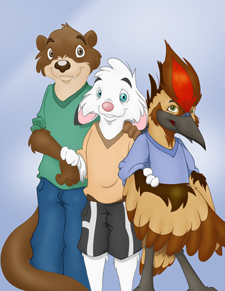 A furry is, at the base, a fan of anthropomorphic animal characters (frequently and somewhat ironically abbreviated as simply anthro). Exactly where on the Sliding Scale of Anthropomorphism these characters are doesn't matter, but most of them fall under Petting Zoo People and Funny Animals, and they're not on either extreme end. The characters may in some instances also be shapeshifters, transforming from fully human form to some kind of animal.

The majority of the fandom consists of people who enjoy fiction and art centered around furry characters. They may simply take part in what others create, or they may be creators themselves. Many, but not all, also have a fursona,[1] which is a furry character representing the individual.

Another subculture of the fandom is Otherkin. These are people who believe they are, in real life, not actually fully human. It may be that they claim to have an animal spirit, which may or may not be a real animal (Therians limit themselves to real animals). Some go so far as to disown the human race entirely, and claim they've been born as the wrong species. Even Otherkin, who're mocked by other furries, mock these people, to give some context to where they are on the social ladder.

There is a significant stigma to identifying yourself as a furry, mainly because on The Internet, they are often the butt of many jokes. For this reason, there are a lot of people who have the same interests, but don't identify as furries. On the other hand, if someone does like works with furry characters, some people are inclined to label them a furry. They may like the works for the furry characters, but they may also like them for simply being great stories. Who exactly is a furry is up for debate, but the only people you can be certain of are the ones who identify themselves as such.

Furry Fandom provides examples of the following tropes:
Retrieved from "https://allthetropes.org/w/index.php?title=Furry_Fandom&oldid=1491241"
Categories:
Cookies help us deliver our services. By using our services, you agree to our use of cookies.