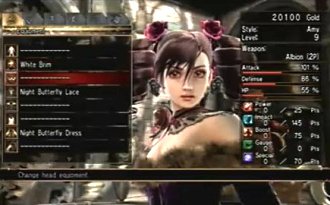 Create your own ass kicker.

This has been around at least as long as Roleplaying Games, and became a Video Game staple well beyond that genre.

The exact statistics depend on the game, but there are some general ones:

These are chosen either arbitrarily, from a list of presets, series of packages chosen with the background or randomly (usually by rolling dice), but usually some combination of these methods. These can also be changed later on if the game allows it (especially when characters level up).

Compare Virtual Paper Doll (which can overlap if that is part of the customization), Class and Level System.

Examples of Character Customization include:

Retrieved from "https://allthetropes.org/w/index.php?title=Character_Customization&oldid=1923509"
Categories:
Cookies help us deliver our services. By using our services, you agree to our use of cookies.