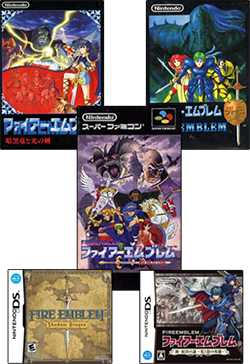 Marth is not in any of these games[1]

The original Fire Emblem timeline, and by far the one most proliferated in the franchise, sporting a respectable three main games, two remakes, four Satellaview maps, an OVA and countless manga adaptations. Yes, these are the ones with Marth.

Also present in the Akaneia canon are countless manga retellings, as well as a two-episode anime OVA adaptation of Mystery of the Emblem. It actually was dubbed and released in the US by ADV Films, long before Super Smash Bros. happened, but remains quite obscure. Additionally, the next two Fire Emblem games Genealogy of the Holy War and Thracia 776 are set in the same universe as the Akaneia games but in the distant past and on a completely different continent, Jugdral; the stories are pretty much only connected through Naga, the Divine Dragon God who has a large role in the histories of both continents. It's been all but explicitly stated that Fire Emblem: Awakening is set in the distant future of the Akaneia universe, with promotional materials not even trying to be subtle about it (fortunately, that game has been confirmed for localization in Europe and North America).