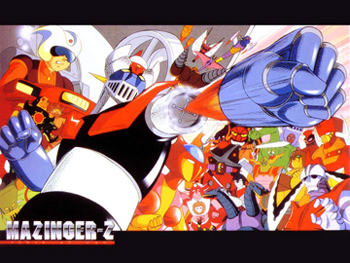 Considered to be THE granddaddy of the Super Robot Genre, Mazinger Z is the first entry of the Mazinger trilogy. The first manga version was serialized in Shueisha Weekly Shonen Jump from October 1972 to August 1973, and it later continued in Kodansha TV Magazine from October 1973 to September 1974. In December 1972, the anime version premiered on Fuji Television. The TV series ended September 1, 1974. A second manga series was released alongside the TV show, this one drawn by Gosaku Ota, which started and ended almost at the same time of the TV show.

Mazinger Z tells the story of young Hot-Blooded Idiot Hero Kouji Kabuto, grandson of a genius professor named Juuzou Kabuto. The Professor secretly built a Humongous Mecha named Mazinger Z, to battle the forces of evil—led by his rival gone mad, Dr. Hell. Unfortunately, Juuzou gets assassinated quickly, but he still manages to inform Kouji about his creation. The Professor tells him to take over, but warns him that he could become "a God or a Devil" with its power.

Mazinger Z was followed by Great Mazinger and UFO Robo Grendizer. However, being a forty-years-old Long Runner, it has got many sequels, spin-offs and remakes throughout four decades:

Made by Go Nagai, who would later inspire the creation of (but not, as common misconceptions would have you believe, actually create) ANOTHER granddaddy of Super Robot anime: Getter Robo.

In the US, Mazinger Z was aired under the title Tranzor Z as a response to the popularity of Voltron. In this dub, Koji became "Tommy" and Sayaka was "Jessica." It was later given a shorter, but more faithful dub run commissioned by Toei. The Toei dub was hugely popular in the Philippines before Ferdinand Marcos ordered it off the air, and some episodes were released on VHS in the U.K.; before Tranzor Z, snippets of this dub had been aired in the U.S. on a Christian Broadcasting Network public-affairs program about Japan.

Tropes used in Mazinger Z include:

Retrieved from "https://allthetropes.org/w/index.php?title=Mazinger_Z&oldid=1867782"
Categories:
Cookies help us deliver our services. By using our services, you agree to our use of cookies.