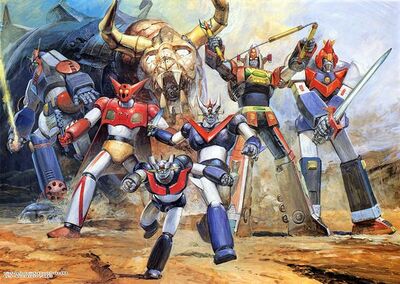 From left to right: Combattler V, Getter Robo, Mazinger Z, Great Mazinger, Daimos, and Voltes V. Daiku-Maryu pictured at the background. All designed to defend the Earth 24 hours a day. Just like any other weapon.

The chances of the series being a Super Robot series rises exponentially with each item present. This, of course, doesn't apply to total parody or gag series, such as SD Gundam.

Note that in general the longer a Real Robot series runs, the higher the chance that the protagonist's mecha will start to display Super Robot traits. If this is the Grand Finale the odds are doubled.

Super Robot shows are typically personified by "Love/Courage/Compassion/Friendship/Righteous-Anger/Insert-Positive-Emotion-Here Conquers All", and almost always have at least one character that is Hot-Blooded, though there are certain notable exceptions... mostly those directed by Yoshiyuki "Kill 'em All" Tomino, to whom Anyone Can Die is less a possibility than a life philosophy (...or at least it used to be). They also typically follow the Monster of the Week format, especially in older shows, though as always there are exceptions. Super Robots tend towards idealism on the Sliding Scale of Idealism Versus Cynicism.

A handy checklist to see if a mecha is a Super Robot as opposed to a Real Robot:

Examples of Super Robot Genre include:

Retrieved from "https://allthetropes.org/w/index.php?title=Super_Robot_Genre&oldid=1702074"
Categories:
Cookies help us deliver our services. By using our services, you agree to our use of cookies.