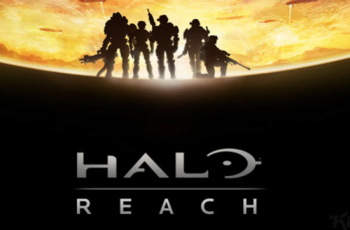 Halo: Reach is the final Bungie-produced Halo First-Person Shooter, released September 14, 2010. It is a prequel, dealing with the events described in the Expanded Universe novel The Fall of Reach. It follows a group of SPARTAN-IIIs (and one SPARTAN-II) called Noble Team. You take on the role of the newest addition, Noble Six, as you fight through the fall of the human colony. It is a completely original game (unlike ODST) and is Darker and Edgier (700,000,000 people die on Reach, you can't change that). The game is also structured more as a war film instead of featuring the Space Opera elements of the main trilogy.

Weapons have been overhauled throughout the campaign so that there is no need for Dual-Wielding. A major new feature is the Armor Abilities, individual upgrades that allow you to customize towards specific objectives such as Active Camouflage, Sprint, Evade, Armor Lock and a Jet Pack. There is also a great deal of customization: the cosmetic changes you make to your personal Noble Six will transfer into the campaign and the multi-player matches allow control over almost every aspect.

Tropes used in Halo: Reach include:

Retrieved from "https://allthetropes.org/w/index.php?title=Halo:_Reach&oldid=1784999"
Categories:
Cookies help us deliver our services. By using our services, you agree to our use of cookies.