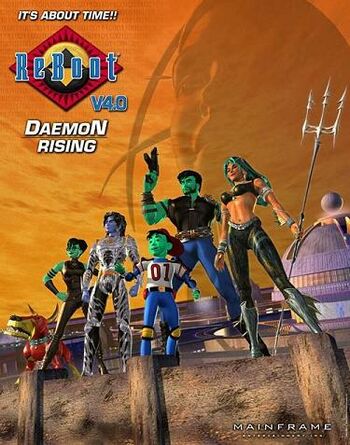 So we've got green, blue and orange, and a purple one not pictured.

In the real world, the color range of human skin is fairly limited. We largely come in varying shades of brownish, and even the most generous will generally only give humans four distinct "colors": pink, brown, red and yellow. This is to say nothing of proper ethnicity.

This is not so in cartoons. Animators, whether they're drawing cartoon characters or building models for a video game, have the freedom to make or draw anything they want. Thus, the normal range of human skin colors needn't have any bearing on the appearance of cartoon characters. Want your characters to be blue, orange, and silver? Go right ahead! Want a dude with a purple face to live next door to a green-skinned, not-from-space babe? The freedom's all yours, pal! If the characters are Genre Blind, their unusual skin tones will probably go unnoticed. If not, this may be Hand Waved in various ways or lampshaded.

Giving your characters unrealistic skin tones sounds like a great way to avoid Race Tropes and Unfortunate Implications, doesn't it? Well, sometimes. Unfortunately, it doesn't always work like this. If a character is meant to be of a specific ethnicity, they will most likely have the "correct" skin tone for their ethnicity, regardless of anything else. It seems as if only "white people" get Amazing Technicolor Skin—everyone else is left out. Still, it's a nice thought. Isn't it?

Compare Amazing Technicolor Wildlife (for animals), and You Gotta Have Blue Hair (for hair). See also Ambiguously Brown, for when the skin tones are within the realms of possibility, but not clearly "defined".

Examples of Amazing Technicolor Population include:

Retrieved from "https://allthetropes.org/w/index.php?title=Amazing_Technicolor_Population&oldid=1893713"
Categories:
Cookies help us deliver our services. By using our services, you agree to our use of cookies.