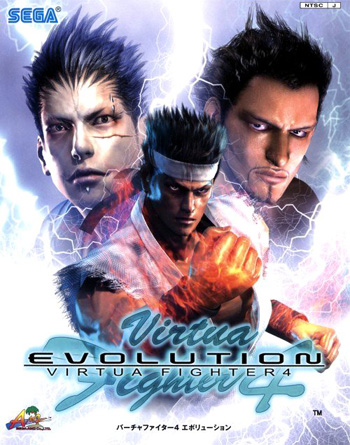 The game's story is about the dealings of the mysterious corporation, Judgment 6 (J6) who holds the World Fighting Tournament as a front to create the ultimate fighter. The game's star is Akira Yuki a Hot-Blooded martial artist seeking to fight worthy opponents and perfect his fighting style. A major recurring storyline in the game is with J6's involvement with some of the other competitors. Kage-Maru's mother, Tsukikage, is turned into Dural, the final boss of the series. Sarah and Vanessa are both kidnapped by J6, the latter used to make the newer version of Dural after Kage saved his mother.

Compared to other 3D fighters like Tekken and Dead or Alive, Virtua Fighter's storyline is not as developed. This is partially due to trying to make the gameplay realistic (sorta) and the depth in the characters' fighting styles as a whole and the moves they use. Virtua Fighter is known for the balance of its characters between each other. Sumo wrestler Taka-Arashi was removed from a couple of sequels because the sumo style at the time was too hard to integrate into future games.

Aside from Taka-Arashi (who returned in Virtua Fighter 5R), all the characters from previous games always return for the next.

Virtua Fighter has released 14 games on several consoles and is critically acclaimed by the gaming community for its balance and attention to detail.

Tropes used in Virtua Fighter include:
Retrieved from "https://allthetropes.org/w/index.php?title=Virtua_Fighter&oldid=1762480"
Categories:
Cookies help us deliver our services. By using our services, you agree to our use of cookies.