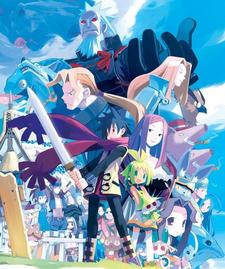 A turn-based strategy game from Nippon Ichi, creators of Disgaea and La Pucelle for the Playstation 2.

When Marona was a child, her parents and their employee Ash were killed by demons. In desperation they used their magic and a plea to God to turn Ash into a Phantom, a type of ghost caught between Life and Death, to protect Marona as she grew up.

Like her parents, Marona is a Chroma; she is able to summon the spirits of the dead and give them temporary physical forms by possessing inanimate objects. For this, the people in Marona's world think of her as The Possessed One who can kill them all, so naturally they go out of their way to insult and belittle her.

Game mechanics aside, Marona's a rather sweet girl who loves everyone, and who seems cheerfully uncomprehending of the fear she provokes in others. Which means her neighbors have someone to protect them from the dark forces that killed her parents.

Updated Rereleases were released for the Wii titled We Meet Again, with a new chapter called "Another Marona" and some new characters as well as a bonus art disc, for the collector's edition savvy, and for PSP titled Heroes of the Hermuda Triangle, as well as an MMORPG entitled Phantom Brave Online.

Tropes used in Phantom Brave include:

We Meet Again and Another Marona has examples of

Retrieved from "https://allthetropes.org/w/index.php?title=Phantom_Brave&oldid=1897114"
Categories:
Cookies help us deliver our services. By using our services, you agree to our use of cookies.