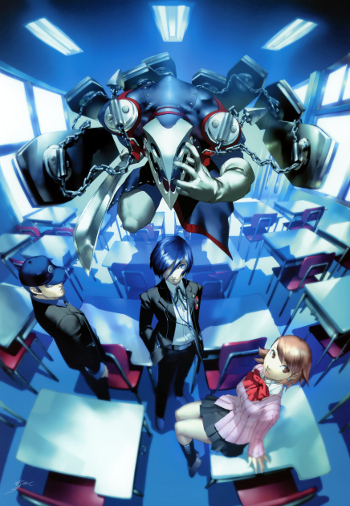 Left to right: Junpei, the main character, Yukari. Above: Thanatos.[1]

Persona 3 is a Japanese Role Playing Game in the Atlus-developed Shin Megami Tensei series that was released on the Playstation 2.

Every night at midnight, a phenomenon called "The Dark Hour" occurs. During this period of time, Time Stands Still, humans are transmogrified into strange coffin-esque objects, and a huge tower Tartarus appears, the stronghold of evil monsters called Shadows. Because of the transmogrification, only a select few know that this time exists; those that don't become transmogrified are those who become prey of the Shadows or, in rarer cases, possess the "potential", or the ability to summon a being known as a "Persona", which takes the form of a mythological character and represents the hidden side of that person.

The Main Character (who the player names) learns this the hard way after a stroll in the bizarre time and a particularly terrifying encounter with a large Shadow, during which he summons his Persona Orpheus by shooting himself in the head with a gun-like device called an Evoker. After this encounter, he joins the secret school club SEES, or the Specialized Extracurricular Execution Squad, which consists of Persona-users like himself who fight Shadows during the Dark Hour at night while balancing going to school during the day. And this is just scratching the surface.

The game itself consists of two portions. During the day, the main character is a normal high school student, and gameplay consists of interacting with other characters to form and strengthen Social Links, which are bonds assigned to a specific tarot Arcana depending on the person, or going out and doing things to boost your Academic, Charm and Courage stats so you can meet more people. Of course, since the main character is a high school student, a fair amount of things periodically happen in class, too, such as quizzes and lectures, which also help raise the aforementioned stats. This involves a great deal of time management, since the entire game goes on a day-by-day basis and you have to thus plan your free time accordingly (story events and exams also take time away from socialization).

At night, the Dark Hour occurs, and the main character and his friends go into Tartarus to fight Shadows and attempt to get to the top. Combat itself consists of turn-based fighting with a twist: when you attack an enemy's weakness, you get one extra turn to attack again and the enemy is in a "Down" status; once all of the enemies are down, you have the option to execute an All-Out Attack for Massive Damage. This, however, also works in the enemy's favor, too, so you have to focus on covering your own weaknesses while attacking that of the enemy's.

The night portion also brings with it another game mechanic, that of Persona fusion, a series staple. Basically, you can fuse Personas together to make new ones, and the result depends on the skills the involved Personas know, the Arcanas of the Personas, and how many you're fusing together. This is also where Social Links come into play; the higher a Social Link for a specific Arcana, the higher the EXP Bonus is for the resulting Persona of that Arcana during fusion, which is really helpful since the Personas take forever to level up otherwise.

The game was critically acclaimed, its Updated Rerelease Persona 3 FES, even more so, and the game is credited with more or less single-handedly bringing Shin Megami Tensei into (relative) mainstream success in the West at last. The game spawned several incarnations and side products due to its immense popularity:

Tropes used in Persona 3 include:
Retrieved from "https://allthetropes.org/w/index.php?title=Persona_3&oldid=1855498"
Categories:
Cookies help us deliver our services. By using our services, you agree to our use of cookies.