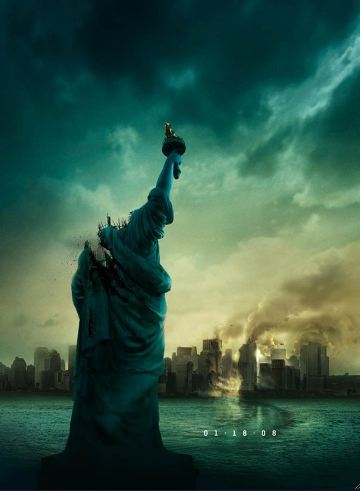 A monster movie released in 2008 by Lost creator J.J. Abrams, and directed by Matt Reeves. Cloverfield follows a group of New Yorkers as they attempt to rescue the girlfriend of protagonist Rob Hawkins (Michael Stahl-David, The Black Donnellys) during an attack by a massive building-sized creature. The film is seen through the perspective of Hudson "Hud" Platt, Rob's friend, who is carrying around a camcorder throughout the film documenting the events.

The movie was shot fairly cheaply, for a budget of roughly $25 million. The movie is seen through a point-of-view perspective, and features homages to older movies (e.g., the Statue of Liberty's head rolling down a Manhattan street was inspired by a poster for John Carpenter's Escape from New York).

Note: There were rumors for a time that Super 8, directed by Abrams and produced by Steven Spielberg, was a prequel. It is actually an unrelated film, though this hasn't stopped Wild Mass Guessing from fans who have noted similarities between the monsters in both movies.

Tropes used in Cloverfield include:
Retrieved from "https://allthetropes.org/w/index.php?title=Cloverfield&oldid=1780433"
Categories: