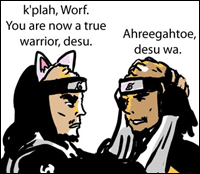 In the Anime Fanfic community, the name given to the practice of including in a story the occasional word or sentence (or paragraph!) of Japanese in place of its equivalent in the author's language of choice, desu. This also occurs in Fansubs and Scanlations.

Sometimes this can be a mere leavening for flavor, using terms likely to be familiar to even a casual anime viewer such as Honorifics, Japanese Sibling Terminology, various pleasantries and exclamations, and the ever-popular "Baka". Another popular one is using "Kami" as synonymous with "God" leading to "Oh Thank Kami!" and the like. However, some authors go overboard, dumping into their stories entire sentences and more in Japanese of varying grammatical precision. While the more thoughtful of such authors may provide footnotes or glossaries for the convenience of their readers, the sudden transition from English to a block of Japanese is still jarring for many readers.

Naturally, opinion varies within the anime fanfic community on this subject. Most readers are united in their dislike for finding walls of Japanese text in the middle of their stories, but some do enjoy (much) smaller "flavor bits".

The form of this that just about everybody, even the purists, despises is "Fangirl Japanese", where a newbie inserts big blocks of Japanese that they don't even understand every other paragraph, not just in their fanfiction (which is usually plain ol' bad) but in their everyday life. The word "kawaii" still leaves a bad taste in many reformed fangirls' mouths. It is amusing, though, to read their flailing attempts if you know enough Japanese to realize that no, "koi" is not the verb for "love" and that they've used the word for "bow (weapon)" instead of that for "bow (hair accessory)" by mistake. This is sometimes seen in Fanfic of such things as Harry Potter, which isn't Japanese, has (usually) no Japanese characters, and hasn't been anywhere near Japan.[1]

This is also a source of much argument in the area of fansubs, over whether or not to include honorifics, localize idioms, translate certain special terms, or use translator notes at the top of the screen.

Occasionally there will be untranslated Japanese in an English dub of an anime, but that almost exclusively applies to Honorifics and attack names, especially ones that translate into literal descriptions of the attack, that would otherwise sound boring, or just be too long to easily shorten into a name that would fit the Mouth Flaps.

Using any of these words without context makes you a Baka.

Retrieved from "https://allthetropes.org/w/index.php?title=Gratuitous_Japanese&oldid=1944156"
Categories:
Cookies help us deliver our services. By using our services, you agree to our use of cookies.