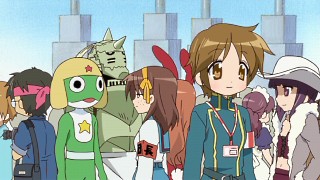 Too bad this isn't a Massive Multiplayer Crossover.

Cosplay is a Portmanteau of the words "costume play". It refers to the fan hobby of making costumes of their favorite characters from anime, TV, movies, comics, video games, etc. and wearing them at fan gatherings. At anime conventions cosplay is one of the most popular events.

And to some people, it is Serious Business. Don't even think about trying to get them to wear the Official Cosplay Gear. They will often wear a Sexy Whatever Outfit though.

If it's a character meeting cosplayers of the character in the same universe, the actual character might get told Your Costume Needs Work. This can even happen to celebrities in Real Life.

Examples of Cosplay include:

Retrieved from "https://allthetropes.org/w/index.php?title=Cosplay&oldid=1700031"
Categories:
Cookies help us deliver our services. By using our services, you agree to our use of cookies.