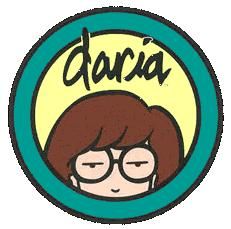 Daria is an animated High School Dramedy about a waifish, sardonic teen girl with coke-bottle glasses, army boots, and absolutely no patience for the idiocy around her (she used to have Beavis and Butthead for classmates, can you blame her?).

Most of the humor is derived from Daria and her friend Jane's conflicts with the collection of twisted teenage archetypes (and often the adults) around them. The last two seasons departed from the Reset Button to create a powerful Story Arc of Daria and her friends coming of age. The show's strong use of Character Development became a major draw on a network loaded with more superficial programming. A major part of it is Daria eventually falling for a Tall, Dark and Snarky boy, Tom Sloane, who is worthy of her and struggling to deal with romantic activities she previously rejected.

A Spin-Off from Beavis and Butthead, the show became a quintessential part of The Nineties in television.

Approximately eight years after the series ended, the show finally got an official DVD release on May 11th, 2010.

Tropes used in Daria include:

Both the stand-alone DVD release of "Is It College Yet?" and the version on the full series set is cut and censored. The original master had music that wasn't licensed for DVD, and MTV lost the audio edit points that would allow re-integration of the clipped material into a releasable product. The extra material was included in re-airings of the movie on The N in exchange for censored content; The N had the rights to the original music.

Also, Jake's childhood at the hands of his father, Mad Dog Morgandorffer and when Jake was sent to military school. Subverted in that it all arguably made Jake a weaker person.

Retrieved from "https://allthetropes.org/w/index.php?title=Daria&oldid=1868520"
Categories:
Cookies help us deliver our services. By using our services, you agree to our use of cookies.