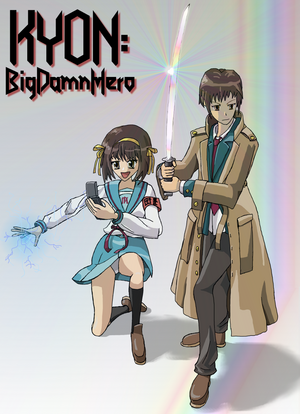 Kyon: Big Damn Hero is the result of creating a crossover between Haruhi Suzumiya and TV Tropes. It starts with an In Medias Res prologue and moving swiftly on to an Anachronic Arc before finally settling into as chronological an order as possible when a Stable Time Loop shows up every few chapters.

As for the plot, it started with Haruhi being told about her powers in order to save Nagato. Then came time travel, breaking up crime rings, a harem plot, Higurashi characters and a subplot involving a Slider and the Sky Canopy Dominion.

Is it worth mentioning that the series also frequently mentions much of the cast being fans of the Trope-tan anime?

The story consists of 63 chapters in 12 arcs:

Chapters up to number 44 (Open Battle Arc, Chapter 1) can be found on Fanfiction.net. Due to negative reception on Fanfiction.net (for his opinions, not his works) the author's website was the only source for chapters 45 through 63.

Sadly, author Brian Randall took his own life on January 17, 2014; this and other works by him will remain incomplete. However, in Spring 2014, friend and fellow fan author Halbarad revealed that he had an almost complete chapter 64, lacking only a title, an epigraph, and a final edit pass. A Google Docs copy of the chapter can be found here. Halbarad appeared at the time to be intending to pick up the fic and continue it, apparently using information he received from Randall, but as of 2021 nothing has yet appeared.

Thanks to hardworking forum goers, there is now a Kinetic Novel adaption! Volume 1 has been released, covering everything up to the first half of chapter 5; it can be found here.

A fan-made timeline can be found here.

There is a character sheet for more details (under construction). Please add character-specific tropes there, unless they apply to several characters or can fit in the main article fine.

When adding tropes, be sure they aren't used just like in the very Troperiffic source material. Those go there.

Remember to add future examples on the pages being linked to.

This fic contains examples of the following tropes, in addition to those already present in the source material:

Retrieved from "https://allthetropes.org/w/index.php?title=Kyon:_Big_Damn_Hero&oldid=1890058"
Categories:
Cookies help us deliver our services. By using our services, you agree to our use of cookies.