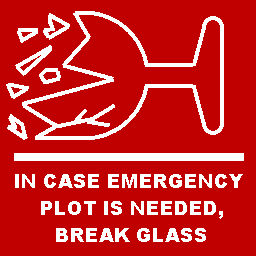 "Then take whatever was behind that, and break it too."

Never ever give a fragile cup to anyone with psychic powers. You're only going to end up minus one cup and pissing off the janitor.
—SF Debris on Babylon 5

Drama can be quite a vandal. It likes to break things just to punctuate the mood. Often takes the form of a dropped glass or object, often in slow motion, but smashing even upright things will do for dramatic emphasis. This is obligatory for a shank being made out of a glass bottle.

A Sub-Trope of Rule of Drama.

Compare Super Window Jump (awesomely breaking glass to herald one's appearance or retreat), Rage Against the Reflection, A Glass in the Hand, Glass-Shattering Sound, Rockers Smash Guitars. Window Pain and the Sheet of Glass are contrived ways of creating this trope.

Examples of Dramatic Shattering include:

"In a specific trope that amps up drama, break things."