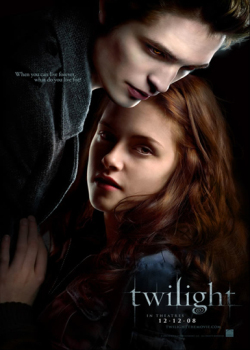 Even if you wanted to, escape is quite impossible.

A series of young adult Urban Fantasy/Paranormal Romance novels by Stephenie Meyer, and the title of the first book. It is about a girl named Bella Swan who falls in love with Edward Cullen, a vampire. Bella is a really special girl, and Edward is (a) unable to use his vampire powers to read her mind, (b) totally hot for her blood and (c) madly in love with her. So, Edward wants to form a relationship with Bella while resisting the urge to suck her dry. Things get complicated in the second book when Bella's childhood friend Jacob, who also has the hots for her, reveals himself to be a shirtless werewolf. There's also the occasional Wacky Wayside Tribe, such as the vampire tracker James and the Volturi.

Has, perhaps unsurprisingly, its own character page.

The series consists of four books (Twilight, New Moon, Eclipse, Breaking Dawn). Stephenie Meyer had plans to make a POVquel called Midnight Sun, which is the plot of Twilight (nearly word-for-word) told through Edward's point of view. Then, leaked copies of the rough draft were released. Meyer has halted the publication until she gets through her reaction over the event, saying "If I tried to write Midnight Sun now, in my current frame of mind, James would probably win and all the Cullens would die." Depending on whether you're a fan or not, that may either horrify or excite you. She now has written a 200 page "novella" called The Short Second Life of Bree Tanner, which came out on June 5, 2010. A companion guide was released on April 12th 2011, after being pushed back to another date multiple times. A Gender Flipped version, titled Life and Death: Twilight Reimagined was released on 2015 along with the 10° Anniversary edition of the first novel.

The film version of Twilight was released in the US in 2008, with The Twilight Saga: New Moon following in 2009, The Twilight Saga: Eclipse in 2010, Breaking Dawn, Part 1 in 2011 and Breaking Dawn, Part 2 in 2012. There were also rumors of an Anime, but they proved to be false. Manga-style illustrations of the Japanese edition still exist. A graphic novel has been released and while it's not all that bad, it's not entirely... sparkly.

Summit Entertainment was recently purchased by Lionsgate, whose CEO has expressed interest in continuing the Twilight saga beyond Breaking Dawn as either a film series or a television series. See here.

Books in this series:

Not to be confused with the numerous other works and characters with the name "Twilight".

The following tropes are common to many or all entries in the Twilight (novel) franchise.
For tropes specific to individual installments, visit their respective work pages.

Retrieved from "https://allthetropes.org/w/index.php?title=Twilight_(novel)&oldid=1965701"
Categories:
Cookies help us deliver our services. By using our services, you agree to our use of cookies.