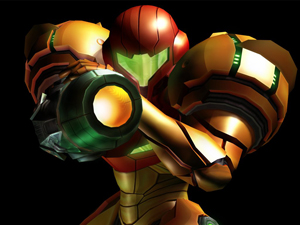 Samus Aran is about to shoot you--now in 3D.

Metroid Prime is a Story Arc offshoot of the Metroid series. It currently contains the following games:

These games were the first 3D Metroid games. Additionally, apart from Pinball, they all have First-Person Shooter perspectives. However, Nintendo themselves bills the series as a First-Person Adventure (think Zelda dungeon structure in a first person perspective)

The main installments of the Prime sub-series were developed by Texas, USA-based Retro Studios, and has proven rather critically and commercially successful.

The sub-series plot takes place between the original Metroid/Zero Mission and Metroid II, and involves a radioactive mutagen named Phazon that arrives on mysterious comets and wreaks havoc on planetary environments. Samus spends most of the sub-series trying to stop the Phazon from turning various planets into dead husks, while at the same time, her Space Pirate enemies are trying to exploit the mutagen for their own evil plans, much like they did the Metroids in the original games. In Prime, the planet hit happens to be Tallon IV, where Samus' Chozo guardians had a second home, and from which they have since vanished. This is due to a meteor charged with Phazon striking the planet, and spreading corruption in the form of Phazon, a dangerous mutagen and corruptive growth. Unfortunately, the Space Pirates see it as a valid power source to fuel their plans, and it's up to Samus to stop the Pirates and stem the tide of Phazon by entering the very meteor that began it all. Echoes sees a similar comet landing on a world named Aether, which is split into two worlds as a result of the crash. Corruption concludes the arc by having Dark Samus, a Phazon-borne copy of Samus, manipulate the Space Pirates into finding the source of Phazon, and assaulting the Galactic Federation with a multi-pronged attack, with only Samus having a chance at stopping the clone by using the power of Phazon herself.

Hunters is a Gaiden Game that takes place between Prime and Echoes, detailing a call from another galaxy about an incredible power available to the strongest warrior who comes to take it. Samus and six other Bounty Hunters step up to the plate, all for different reasons. Hunters' seven playable characters provided some multi-player opportunities, but the game was criticized by longtime series fans as a pandering attempt to win over Halo-style gamers, with limited success at best. A demo of Hunters, titled Metroid Prime Hunters: First Hunt, was packaged with the original model Nintendo DS for a while - it featured three single-player game modes and a multi-player mode. The multi-player maps were reworked into maps used in the final game of Hunters but the demo otherwise has little to do with the final game.

Pinball is basically a retelling of Prime's story via multiple stages of a pinball table. If you're into that kind of thing, it can be fun, but it is canonically unimportant.

All three console games in the series were eventually re-released on the Wii as Metroid Prime Trilogy, together on one disc with updated Corruption-style controls for Prime and Echoes, along with a widescreen aspect ratio, bloom lighting and higher-quality textures - not to mention the token reward system and even more of the sequence breaks from the first two games removed.

Tropes used in Metroid Prime include:
Retrieved from "https://allthetropes.org/w/index.php?title=Metroid_Prime&oldid=1758701"
Categories:
Cookies help us deliver our services. By using our services, you agree to our use of cookies.