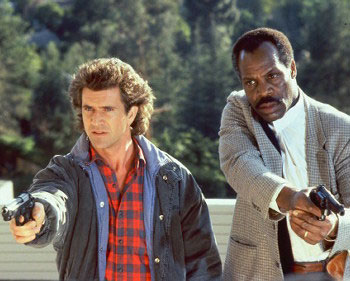 Lethal Weapon is a tetralogy of American action movies/comedies directed by Richard Donner and starring Mel Gibson and Danny Glover as a pair of mismatched detectives in the LAPD. The first movie effectively defined the entire Buddy Cop Show genre. The unbalanced, unhinged Riggs was contrasted with calmer, stricter family man Murtaugh.

In Lethal Weapon (1987), Glover is playing Roger Murtaugh, the strict cop that plays by the rules, and worries about getting too old (for this shit). He is partnered with Martin Riggs, a suicidal badass despairing over the death of his wife. Riggs is well versed with both martial arts and gun play and added to his berserker tendencies makes him a candidate to be registered as a lethal weapon. They start tracking down a major drug dealer who has ties within the force.

In Lethal Weapon 2 (1989), they received a comedy sidekick played by Joe Pesci as a witness and insider to the new bad guys. The Big Bad of the movie was Arjen Rudd, a South African diplomat using diplomatic immunity to hide behind drug smuggling. As it turned out, he was responsible for the death of Mrs. Riggs.

In Lethal Weapon 3 (1992), Riggs finds a new Love Interest in Lorna Cole (Rene Russo), a fellow cop who is as tough and crazy as he is. She helps them to investigate a rogue officer who's been selling specialized armor piercing "cop killer" bullets to the mob and onto the streets. Looming over Murtaugh's head is his upcoming retirement and trying to figure out his life as a cop and what it will be like after retirement.

In the final installment, Lethal Weapon 4 (1998), Lorna is pregnant with Riggs' baby and both he and Murtaugh are contemplating the implications of growing older. Meanwhile, Riggs and Murtaugh receive a brash younger detective named Lee Butters (Chris Rock) and are dealing with Chinese Triads when they uncover a boatload of illegal immigrants. The Dragon (In Chief) /BigBad of this group is Wah Sing Ku, played by Jet Li, by whom Riggs finds himself entirely outmatched.

Each movie played out like a cross between the typical cop show and Indiana Jones, with spectacular stunts at a breakneck pace while following a chain of evidence.

Now has a character sheet

The following tropes are common to many or all entries in the Lethal Weapon franchise.
For tropes specific to individual installments, visit their respective work pages.
Retrieved from "https://allthetropes.org/w/index.php?title=Lethal_Weapon&oldid=1549698"
Categories:
Cookies help us deliver our services. By using our services, you agree to our use of cookies.