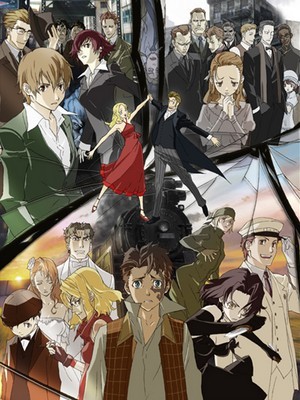 In prohibition-era America, a cacophony of stories stirs. Thieves, terrorists, mafia gangsters, and other elements of pulp fiction collide in a chaos of intrigue and violence. When a hapless alchemist creates an elixir of life that can confer immortality, a series of incredible events follow that spiral out of control, touching upon the lives of an enormous cast of characters.

Baccano! [1] originally started as a series of light novels (summarized here, with links to translations on the same page), and was adapted into a 13-episode anime (16 including the bonus episodes) in 2007. The anime adaptation is centered on three specific stories from the novels, taking place in 1930, 1931, and 1932 respectively, jumping around from one to the other quite frequently. Even scenes set in the same time period regularly appear out of order and overlap with each other, all adding up to a rather delicious non-linear storyline that is very rewarding if you keep your wits about you when watching. Each of these stories relates either directly or tangentially to the immortality formula and those individuals who have drunk of it, sharing some characters and having some plotlines intersect. Three extra episodes were released with the DVD, acting as an epilogue for each character and bringing the story full circle.

The 1930 story stars Firo Prochainezo, a rising member of the Martillo camorra family. Through a chance encounter with a mysterious young woman, he and several other characters are pulled into a plot involving a group of alchemists in a centuries-old conflict over the fabled elixir of life.

In 1931, disaster befalls the famed Flying Pussyfoot transcontinental train as it makes its journey from San Francisco to New York. A terrorist/cult group known as the Lemures seek to use the train's passengers, including a US Senator's wife and daughter, as leverage to demand the release of their leader, Huey Laforet. Meanwhile, a gang of killers lead by the Russo family assassin Ladd Russo are trying to hold the train hostage to demand ransom from the train company. Caught in the middle is a group of delinquents originally attempting a train heist, who take it upon themselves to save the passengers. And amidst all this, a terrifying blood-red "monster" called the Rail Tracer has begun to murder people all over the train...

1932 deals with Eve Genoard, searching for her older brother Dallas following his disappearance after the events of the 1930 story. She soon becomes entangled in the rivalry between the Runorata and Gandor families, both of which also have an interest in her brother.

The extra DVD episodes continue off right where the 1932 story ends time-wise, and focus primarily on the arrival of Graham Spector, a friend of Ladd Russo's, as he seeks revenge for what happened aboard the Flying Pussyfoot. This arc also acts as an epilogue for the series, showing what happens to nearly all the characters while also filling in on some backstories and answering a few lingering questions.

The novels are formatted a little different than the animation as each book covers one major event. While they have not been written in chronological order, most books are best defined by the year they take place. Most books center on a single character or a small group of characters as a focal point for the story.

Baccano! is part of an overarching Verse of light novels written by Narita Ryohgo that includes the following:

Also, be sure to check out the character sheet for the who's-who on all the leads. Contains unmarked spoilers.

Tropes used in Baccano! include:

Given the whole setting of the story, it could be argued that nearly every character is a Pro- and An- tagonist at exactly the same time, depending on who is the current "main character" of the story.

Firo is a half Italian member of the Camorra living in New York City. By 2001, he has mastered Japanese on his own through reading manga.

The fourth episode title describes one of the show's lovable psychopaths: "Ladd Russo Enjoys Talking A Lot and Slaughtering A Lot."
The author's preferred translation of baccano is "stupid commotion" which is an adequate summary of the plot. The semi-interlacing plot lines do look a lot like a "stupid commotion" for the first few episodes before all the pieces start falling into place.