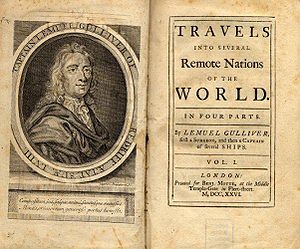 It is computed that eleven thousand persons have at several times suffered death rather than submit to break their eggs at the smaller end [...] Neither are any wars so furious and bloody, or of so long continuance, as those occasioned by difference in opinion, especially if it be in things indifferent.
—Musings upon the Big/Little end heresy, Gulliver's Travels

One of the precursors of Speculative Fiction, Travels into Several Remote Nations of the World, in Four Parts. By Lemuel Gulliver, First a Surgeon, and then a Captain of several Ships was written by Jonathan Swift as a parody of the now-dead genre of traveller's tale, satirising 18th century follies, but is now, sadly, largely remembered as a children's tale, despite being Swift's Magnum Opus and a heavily satirical and adult book.

On Gulliver's first voyage he is shipwrecked in Lilliput, where everything is one-twelfth normal size. After many incidents (mainly getting entangled in a holy war over which end to open a hard-boiled egg), he escapes on a raft, returning to England. His second voyage takes him to Brobdingnag, where everything is twelve times normal size. Gulliver is kept as a pet by the locals, and has many philosophical conversations with the king of Brobdingnag before being carried off by an eagle, which drops him where he can escape.

On Gulliver's third, and less well-known, voyage, his ship is attacked by pirates, but he is rescued by the flying island of Laputa, home to a society of proto-TV Geniuses. After various incidents, including the first description of bombing and a conversation with the ghosts of historical figures, Gulliver returns home via Japan. As mentioned below, a deleted section of this satire attacked the English for their treatment of Ireland, but for the most part it was intended as a scathing condemnation of the nascent European Enlightenment, with the TV Geniuses representing the philosophers, scientists, and academics of his time.

On Gulliver's fourth and final voyage, his crew mutinies. He's marooned on the isle of the Houyhnhnms, where the horses are intelligent (the titular Houyhnhnm) and the humans are animals, called Yahoos. Gulliver soon decides the Houyhnhnm are superior to normal humans, who he comes to see as barely any better than the Yahoos. After the Houyhnhnms throw him out, Gulliver returns to England where he spends all his time talking to his horses as he finds all humans (including his own family) to be nothing more than Yahoos who happen to wear clothes.

Gulliver's Travels has been filmed several times, but most of the adaptations omit the last two voyages. Often, a bowdlerised version of the voyage is printed as a children's book. Go here for the 1939 animated film version, and here for the 2010 film starring Jack Black.

There also a TV mini-series starring Ted Danson and Mary Steenburgen. In this version Dr. Gulliver has returned to his family from a long absence. The action shifts back and forth between flashbacks of his travels and the present where he is telling the story of his travels and has been committed to an asylum. It is notable for being one of the very few adaptations to feature all four voyages, and is considered the closest adaptation to the book despite taking several liberties, such as Gulliver not returning home between each part.

And in 2011 The BBC produced a Setting Update for Radio 4 called Brian Gulliver's Travels, which abandoned the original locations entirely in favour of ones that made satirical points about modern Britain. Interestingly, it duplicates the Framing Story above of Gulliver describing his stories from a mental institution.

Also, Robert A. Heinlein wrote a scathing satire of the fourth journey in his YA novel Starman Jones, stating that anyone who would prefer the anti-individualistic lifestyle of the Houyhnhnms over human free will doesn't deserve to be human to begin with. Swift would likely agree, given that the fourth journey was in part a scathing satire of the Enlightenment, which Swift loathed.

The actual story is a staple of the Public Domain, making it very easy to track down and read this story.

Tropes used in Gulliver's Travels include:
Retrieved from "https://allthetropes.org/w/index.php?title=Gulliver%27s_Travels&oldid=1653946"
Categories: