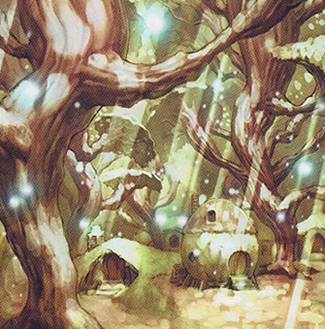 This is a Small Secluded World populated by a tribe or group who comes to the pragmatic decision that what goes on outside their borders no longer is or has never been their problem, and choose to hole themselves up in some distant or inaccessible location because of some ancient evil or out of general disgust of others. If the villagers aren't outright xenophobic, they're only as polite as they need to be once they suggest you not stay very long. Especially isolationist villages may even consider outsider to be "Not Of the People". Just as often, they manage to become a fantastically rich City of Gold, harmonious Ghibli Hills, or at the least a pretty decent place to live (just mind the dark secret), A recent interpretation of the trope is that even if you can keep your isolation from destroying you, the rest of the world will judge you by the few they encounter: those you cast out. You'll be judged by your garbage. Oh Crap. Compare City in a Bottle.

May be justified if the setting is Post Apocalyptic and hiding out allowed them to escape The End of the World as We Know It. In this case, expect much in the way of What If angst and a running debate of My God, What Have I Done? vs I Did What I Had to Do. Depending on where the story is on the Sliding Scale of Idealism vs. Cynicism, the protagonist may choose to Must Make Amends or just shrug.

If the village is well planned by the writers, there's a good chance that someone in the main cast is a member, especially an exile, of this group. There's also a chance that a reformed villain might shack up here in the epilogue, as he'd be rejected elsewhere. Of course, this could also be an Ass Pull.

Although the moral is sometimes about respecting other people's opinions and pacifist approaches to violence, this trope is usually tied into An Aesop about evil happening when good men do nothing. Expect the inhabitants of the village to turn around their opinions and slowly reintegrate themselves into the surrounding culture. In video games, this usually happens just as one of the villains burns down the village after its airtight defenses naturally go completely to pot. Don't expect them to be that big of a help afterwards, though.

This is Older Than Radio: it was well enough known in the 18th century that both Swift and Voltaire could satirize it effectively (the island of the Houyhnhnms in Gulliver's Travels and El Dorado in Candide, respectively). This is also somewhat Truth in Television. Japan, for instance, was mostly cut off from the rest of the world by government policy, as were Burma and Tibet at different times. See Neutral No Longer for when the people in this village can no longer stand by quietly.

Inhabitants are not required to be Elves, but you can expect Space Amish or Space Elves of the Proud Scholar Race sort and especially Perfect Pacifist People to reside here. Can be a Close-Knit Community. May contain a Superweapon Surprise.

Tree-Top Town is a common subtrope. If they're highly advanced, see Advanced Ancient Acropolis. If supposedly mythical creatures live there, it's a Fantastic Nature Reserve.

Examples of Hidden Elf Village include:

Retrieved from "https://allthetropes.org/w/index.php?title=Hidden_Elf_Village&oldid=1915921"
Categories:
Cookies help us deliver our services. By using our services, you agree to our use of cookies.