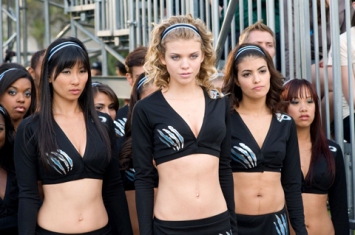 In Hollywood All Guys Want Cheerleaders... until they actually get to know them.

In any High School setting, no Stock Character is portrayed as harshly as the cheerleader. Cheerleaders are often depicted as outright evil, with the Alpha Bitch as their leader. If the girls aren't evil they might just be Brainless Beauties, following their Alpha Bitch leader out of ignorance or a desire to be approved by her. The Captain, if not the whole squad, will usually portrayed as Really Gets Around. From evil to slutty to dumb, any cheer leader in western media can be expected to be portrayed as shallow and superficial because popularity is her first and only concern.

Even If a sympathetic, smart character is a cheerleader she will probably end up quitting the squad as part of her 'growth'. Apparently in Hollywood one can't be a rounded person and remain a cheerleader. A good girl might want to join the squad but her friend will think that cheer leading is inherently bad and try to stop her, leading to a lesson on how a person should get to do what makes her happy.

This trope seems to have weakened slightly in recent years, perhaps due to the popularity of the Bring It On series of films. A sympathetic depiction is still the exception rather than the rule however. In fact, in a sign of how strongly rooted this trope is even media with relatively sympathetic depictions of cheerleaders will often feel the need to go out of their way to explain to the audience (via an outsider POV character like in Hellcats) that cheerleaders can be good people too.

Male cheerleaders are sufficiently rare in fiction that they are usually developed as characters themselves rather than falling under The Cheerleader trope. A good rule of thumb is that if you see a male cheerleader then cheerleading will be depicted positively, or at least less negatively.

See also Jerk Jock, Alpha Bitch and Popular Is Dumb. Contrast with the positive Cute Sports Club Manager. A cheerleader also has a better than average chance of being a Dumb Blonde, but it isn't required. They can be The Fashionista sometimes but often suffer from a Limited Wardrobe: at least during school hours many cheerleaders never wear an outfit other than their uniforms.

Of course this isn't always Truth in Television. Most cheer leaders are in the squad because they like singing and dancing, and are general people persons, bitchiness doesn't exactly mesh well with winning the crowd.

Examples of The Cheerleader include:

Retrieved from "https://allthetropes.org/w/index.php?title=The_Cheerleader&oldid=1651446"
Categories:
Cookies help us deliver our services. By using our services, you agree to our use of cookies.