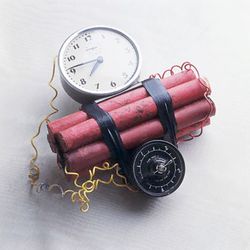 Perhaps it's an egg timer?

It's a bomb! Duck and cover!

Bugs and listening devices are never covert on TV shows.

The same goes for time bombs or other explosive devices. On TV they always have blinking lights (red is a popular color), audible beepers and/or a timer counting down on them. Some bombs have all three. Older depictions have a loudly ticking alarm clock taped to a bundle of dynamite.

They also usually sprout wires, expose naked circuit boards, detonating caps or are hooked to visible wrapped sticks of dynamite or neatly stacked piles of a labeled military explosive like C4 or COMP-B.

This is Older Than Television; if you look at animated cartoons from the early to mid 20th Century, one of the more common mayhem-related props is a bomb--black, bowling-ball-sized, with burning fuse stuck in the top, and possibly the word BOMB on it in big happy white letters.

In short, there's no way you or anyone else could possibly confuse the device with anything other than a bomb. All of which are features that would be completely impractical on a real explosive device that you'd ideally want to keep hidden/disguised from the person or persons whose ship/base/car/body you're about to blow up.

This trope may be justified, however, if the Incredibly Obvious Bomb was never meant to be a weapon in the first place. Civilian explosive charges used for excavation and demolition are brightly colored, festooned with techy bits, and clearly labeled as explosive for exactly the reasons military explosives are not. This trope may also be justified if the Incredibly Obvious Bomb's primary purpose is to draw your attention away from the real bomb, or even to lure you into an ideal position for it or some other attack.

Examples of Incredibly Obvious Bomb include:

Tracy: They looked like bombs! I mean, i didn't see them, but... i'm sure they looked just like them.