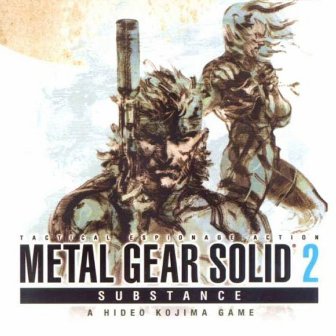 You know the anticipation for a game is big if you can package a demo of it in another game and get that game to sell like hotcakes. Metal Gear Solid was a huge success and its inevitable sequel was released in 2001.

Metal Gear Solid 2: Sons of Liberty takes place two years after the previous game, when the world is flooded with Metal Gear derivatives ("Metal Gear! Can't be...") after Revolver Ocelot sold the plans to Metal Gear REX on the black market. Snake and Otacon, now members of an anti-Metal Gear organization named Philanthropy, learn from an anonymous tip that the military may be developing its own Metal Gear to combat all the other Metal Gear derivatives, and Snake is sent to infiltrate an oil tanker (in his trademark skin-tight pants) to see the new Metal Gear for himself, and take pictures of it to expose the military's plans to the world. As you might expect, the mission ends in disaster, as Ocelot makes his presence known again, hijacks the new Metal Gear, and sinks the tanker...and Snake with it.

Fast-forward another two years, and the game skips to the Big Shell, an offshore facility built to contain and clean up the aforementioned tanker's oil spill, where a terrorist group named Sons of Liberty, led by a man who claims to be Solid Snake, is holding the entire facility (and the president of the United States) for ransom, threatening to destroy the facility if their demands aren't met, which could result in the worst environmental disaster in history. In response, a FOXHOUND operative named Raiden, fresh from VR training, is sent to infiltrate the facility and take care of the hostage situation, aided by his support team (his girlfriend Rose, and Colonel Campbell) and a strangely familiar marine named Pliskin.

Since it's Metal Gear Solid, you know what to expect from the plot, but it really gets cranked Up to Eleven in this installment, with codec conversations that constantly break up the gameplay and cutscenes that can run for well over an hour. The game also introduces a secret group of conspirators named the Patriots, who have been running the country for centuries from behind the scenes, but it takes a backseat to the relationship between Raiden and Rose. The game is especially remembered for its Mind Screw of an ending, which has been analyzed endlessly and even has its very own page here on TV Tropes.

The story is a surreal No Fourth Wall postmodernist rampage through the relationship between game and player, which is, depending on who you ask, a landmark in gaming and hugely ahead of its time, or a self-absorbed rant which made no sense and cried for an editor. Perhaps both. While the storyline was despised by the general population for its controversial, extremely complicated plot-twists and debilitating main character switcheroo (Solid Snake had become a true meme by then, with his shamelessly badass personality and distinctive, growling voice), it sold extremely well and became a cult success amongst the sort of people who enjoyed the ending of Neon Genesis Evangelion - and is even used to explain meme theory in some serious institutions. Despite the polarizing nature of the storyline, the game received critical acclaim for its groundbreaking gameplay and graphics which heavily utilized the then new Playstation 2's capabilities.

MGS2 introduces many gameplay mechanics that would define the rest of the series, with deeper stealth mechanics (it is now possible to take out guards non-lethally with tranquilizer rounds, as well as hide in lockers), an immensely increased level of interactivity with the game world, and far more advanced enemy AI (guards get suspicious if a sentry fails to deliver their status report, and actively seek out the player should they be spotted). It also showcased some great graphics and awesome character animations. Due to the game entering production on September 12, 2001, there were also several things cut from the final version of the game relating to the possible destruction of Manhattan. These aspects were later implemented in its official Novelization by Raymond Benson.

Some time later, the game was re-released as Metal Gear Solid 2: Substance as a multiplatform release on the PlayStation 2, PC and Xbox, with a whole bunch of VR missions, an additional 'Snake Tales' mode starring Solid Snake in short sneaking missions around the main game's sets, and a skateboard game based on Konami's own Evolution Skateboarding--and new pin-up posters. There was also a bonus game disc, The Document Of Metal Gear Solid 2, which was essentially an interactive Making Of featurette, including interviews with the developers, behind-the-scenes footage of the motion capture actors, and every cutscene in the game. This disc was sold separately in Japan and the United States, but was included for free in the PAL release of Substance.

Although the next game in the series, Metal Gear Solid 3: Snake Eater, was a prequel to the Metal Gear saga, Metal Gear Solid 4: Guns of the Patriots continues the story a few years from where this game left off, and reintroduces Raiden after he's taken about five levels in badass, not to mention retconning this game's bizarre ending into something a little easier to swallow. Like the first game, this one also has a Novelization by Raymond Benson, and a comic book adaptation, also available in interactive form on the PSP, and as a fully-voiced DVD version as Metal Gear Solid 2: Sons of Liberty: Bande Dessinee (but only in Japan!). A Let's Play of this game by Something Awful residents Chip Cheezum and General Ironicus can be watched here. A high-definition re-release is now available on Play Station 3 and Xbox 360 in the Metal Gear Solid HD Collection, alongside Snake Eater and Peace Walker.

There's room for only one Snake, and one Big Boss!

You don't have what it takes after all!

Retrieved from "https://allthetropes.org/w/index.php?title=Metal_Gear_Solid_2:_Sons_of_Liberty&oldid=1952011"
Categories:
Cookies help us deliver our services. By using our services, you agree to our use of cookies.