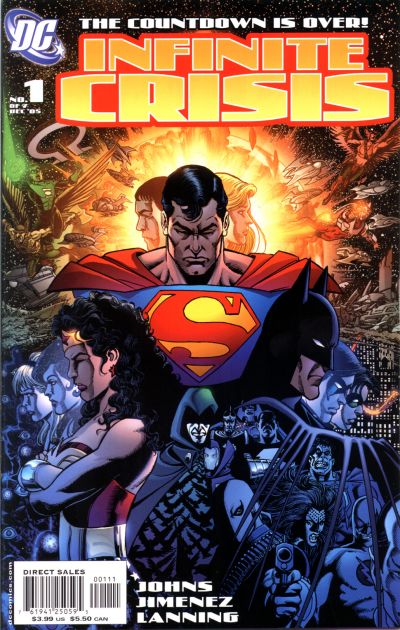 The secrets of the past, the sins of the present, and the harbinger of what was yet to come...

In 1985, DC decided to clean house and create a stabler, more singular continuity. And so they gave us Crisis on Infinite Earths. And it was good (reception-wise), even though it left some issues with continuity (many of which were addressed in Animal Man). Since then, DC has not been shy with the Crisis Crossovers, though most of them could not live up to the standard the original Crisis had set. Zero Hour: Crisis in Time mucked up continuity a bit, and Identity Crisis was in reality just a murder mystery with a plot the fanbase doesn't quite agree on. In honor of the Crisis' 20th anniversary, the editorial staff decided to tie up a few loose ends and create a full blown sequel to it. And in theory, it was a good idea.

Since the Crisis, fans had complained that nearly every title DC produced had been getting progressively Darker and Edgier. The Big Three had been hit hardest. Batman lost his sidekick, had his back broken, had Gotham hit by TWO plagues and an earthquake, and just barely saved Gotham from the No Man's Land. Superman died, was replaced four times (two of which were a clone and an evil cybernetic doppleganger), and came back to life JUST to start. Wonder Woman was arguably affected the least, but was recorded killing Max Lord to save Superman. The DCU was dark and getting worse, especially since the events of Identity Crisis, The O.M.A.C. Project and others came to light. The opinions of the fans had been heard, but a question was raised by DC: "What would the heroes of the Crisis -- what would the Golden Age Superman think?" Their conclusion? "We saved the wrong Earth." Their solution? Recreate the Multiverse into a Merged Reality.

Thus the foundation was set for Infinite Crisis.

The survivors of the Multiverse, Alexander Luthor Jr, the Golden Age Superman (Kal-L), Superboy-Prime, and Lois Lane entered a 'paradise dimension' at the end of the Crisis, but were able to watch the new Earth. As time went on, they were disappointed by the growing cynicism in the universe and Prime and Luthor began to plan to replace the Earth with a better one. Kal-L agreed, but was more attentive to his dying wife, which Prime and Luthor used to break free from their dimension and enter Earth. Due to Superboy-Prime's punching of the barriers of the dimension, several things changed without explanation. While Prime manipulated events in space, Luthor stayed on Earth and disguised himself as the regular Lex to form a Secret Society of Villains (sans The Joker) and even recruited the treacherous Psycho-Pirate from the original Crisis. When another hero, Pariah, who was instrumental in the fight with the Anti-Monitor, came to warn Lex Luthor of a coming danger, Alexander Luthor killed him.

Because of Wonder Woman's murder of Max Lord (who was responsible for the murder of Ted Kord), the treachery of the Justice League, the movement of the planet Rann into Thanagar's orbit, and the center of the universe no longer being Oa, chaos broke out all across the universe. With Hal Jordan revived, the Spectre was without a host and was tricked by Jean Loring, the new Eclipso, into destroying the magic of the universe, which ultimately led to the death of Shazam. Not to mention that before his death, Max Lord hijacked the Brother Mk. I satellite and injected millions of people with the O.M.A.C. nanoprobes which were to activate and transform people into cyborgs to eliminate any and all metahumans upon Lord's death (and it was later revealed that Alexander Luthor screwed up Brother Mk. I further, causing it to go rogue, rename itself Brother Eye, and try to kill as many heroes as it can with its O.M.A.C.'s). Finally, the story began with the abduction of the Martian Manhunter and the destruction of the Justice League Watchtower.

Whew! And that's just the prologue to the story!

In the main story, Alexander and Superboy-Prime take all the heroes and villains that they spent the past year kidnapping and attach them to a giant "dimensional tuning fork". This allows them to recreate the Multiverse and bring back all the Earths that were lost during the original Crisis, which Alexander can smash together to form what they consider the perfect Earth. Luckily for the Multiverse, Prime picks a fight with the regular Superboy. The fight escalates, and the two eventually crash into the fork, causing all the Earths to merge into one Earth. Prime snaps and flies to the center of the universe in an attempt to destroy and remake the universe. He is intercepted by Superman and Kal-L, who beat him into submission, but not before he kills Kal-L.

Plus a bunch of other stories involving the Secret Society of Supervillains trying to Take Over the World by force, Batman leading a team to take down Brother Eye, Superman and Kal-L fighting over Lighter and Softer versus Darker and Edgier, and a bunch of heroes trying to do something about Alexander messing with the universe.

As with Crisis on Infinite Earths, a great number of Retcons occurred as a result of the story, in this case caused by a combination of the recollapse of the once dead Multiverse and the punching of the Source Wall by Superboy-Prime.

The changes caused by the rebirth and collapse of the Multiverse were:

Needless to say, in order to fully appreciate Infinite Crisis, you'd better have done your research, especially with the tie-ins as all of the above would eventually become more important later on. Worlds lived, worlds died (the same could be said of many characters), and the DC Universe was never the same... literally, as it was later revealed, due to the events of Infinite Crisis, The Multiverse was brought back, albeit with a definite number. Later references would call this event the "middle Crisis"; part of a saga that started with Crisis on Infinite Earths, and ran through Final Crisis. The Multiverse and the fate of it and many of the DC superheroes characters (read: plotlines) were later revealed and concluded in the immediate sequel, 52.

Currently being unofficially converted into an audio drama, albeit very, very slowly. There is also an official adaptation released by Graphic Audio... it's good for a car ride, if you're well-versed in the DC Universe.

Tropes used in Infinite Crisis include:
Retrieved from "https://allthetropes.org/w/index.php?title=Infinite_Crisis&oldid=1747690"
Categories: