The Fourth Wall Will Not Protect You 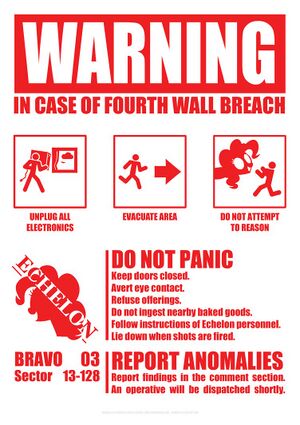 A monster is on the loose terrorizing a bunch of innocent people. As long as the monster and the victims are characters in a fictional world, one would usually be correct to assume that the boundaries of the Fourth Wall will be respected. But then, Breaking the Fourth Wall, the monster assaults the omniscient narrator, or leaps out at the audience.

See also Rage Against the Author and The Most Dangerous Video Game. May involve Sean Connery Is About to Shoot You or Tome of Eldritch Lore. For an in-universe equivalent, see Dead Line News. Compare Refugee From TV Land. See also Television Portal.

Examples of The Fourth Wall Will Not Protect You include:

who winks at the player) but others, like Mileena, tend to be very threatening.

Retrieved from "https://allthetropes.org/w/index.php?title=The_Fourth_Wall_Will_Not_Protect_You&oldid=1961625"
Categories:
Cookies help us deliver our services. By using our services, you agree to our use of cookies.