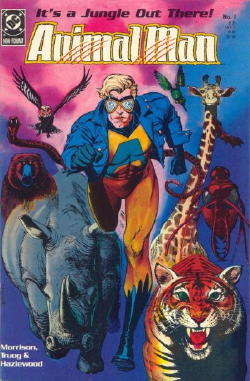 "When I was young...when I was young I had an imaginary friend called Foxy. He lived in a vast underground kingdom. A utopia ruled over by peaceful and intelligent foxes. I used to signal him. My parents bought me a torch so I could signal him. Not a flashlight. We call them torches over here. I used to stand at the top of Angus Oval and shine my torch out towards the hills. Foxy always signaled back. That was more than twenty years ago. I've come to send a signal out into the dark. It seemed like the only thing worth doing. Are you there? Can you see me? Foxy, I came back. I didn't forget. I came back. ... The line of the hills stays dark."
—Grant Morrison

Buddy Baker, also known as Animal Man, was one of many Super Heroes created during the 1960s. He first appeared in Strange Adventures #180 (September, 1965). Created by writers France Herron and Dave Wood, and artist Carmine Infantino. The new character was about as fun and exciting as wet cardboard. He could take the abilities of any animal who was nearby and was granted this power by yellow aliens. He mainly used it to be a Flying Brick, though.

Until 1988, when Grant Morrison was given the chance to write Buddy's new series. Then, Buddy became more than just your generic superhero: he started caring about animals, fighting for animal rights. There was also the drama of his family, who fully knew he was a superhero and tried to support it. And then things took a turn for the weird...

Morrison managed to combine family drama, animal rights activism, superheroics, and a heaping helping of Meta Fiction to make this one of the most memorable comic books ever. It's brilliant, poignant, heartbreaking, and heartwarming at the same time.

Morrison left after issue #26, and the series continued for another sixty-odd issues, eventually coming under the Vertigo imprint - but Morrison remains the defining run on the title. Animal Man continues to make appearances across The DC Universe, including a starring role in 52 (co-written by Morrison).

In September of 2011 Animal Man was one of the characters receiving a series as part of the line wide New 52 relaunch. The new series is written by Jeff Lemire with art from Travel Foreman, and will deal with Buddy and his family on the road trying to discover the origin of Buddy's powers as Maxine develops her own. At the same time, however, they're being hunted by the Hunters Three.

Tropes used in Animal Man include: