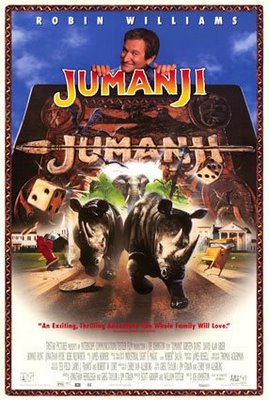 Jumanji is a 1995 American fantasy-adventure-comedy film directed by Joe Johnston and based on Chris Van Allsburg's popular 1981 children's book of the same name. Expensive, state-of-the-art computer graphics and animatronics were employed by Industrial Light & Magic for the special effects sequences. The film stars Robin Williams, Kirsten Dunst, Bonnie Hunt, and Bradley Pierce. It was followed by an animated television series that ran from 1996 to 1999 and a Spiritual Successor, Zathura, in 2005.

The story is about the titular supernatural and ominous board game which makes animals and other jungle hazards appear upon each roll of the dice. In 1969, after fleeing from some bullies, a boy named Alan discovers the board game in a construction site where it was buried 100 years prior. Later that day, just as he is about to run away from home to avoid going to boarding school, his friend Sarah shows up and together they start playing the game. However, the game acts strange and upon his first move, Alan is trapped inside.

Cut to 1995 when two orphans named Judy (Dunst) and Peter (Pierce) move into Alan's old house to live with their aunt. While exploring the house, they come upon Jumanji in the attic of the house. The game, still unfinished from twenty-five years ago, retains the moves made by the first players. After getting attacked by several monstrous animals, Peter rolls the dice to free a now adult Alan (Williams) from the inside of the game. Seeking out the help of a now adult Sarah (Hunt), the group decides to play through the entire game and set things back to the way they used to be.

The film was followed up by an animated series produced by Klasky-Csupo (of Rugrats and Rocket Power fame). Clearly not a direct sequel to the movie, the premise actually had that when Judy and Peter played the game they would be given a riddle to solve (sometime involving An Aesop) and they would be transported into the Jumanji jungle that Alan resided in for years. While the kids would be transported back upon solving their riddle, Alan's riddle has never been solved and he remains trapped. So the kids risk their own lives continually playing the game to help Alan leave Jumanji.

Tropes used in Jumanji include:
Retrieved from "https://allthetropes.org/w/index.php?title=Jumanji&oldid=1560305"
Categories: