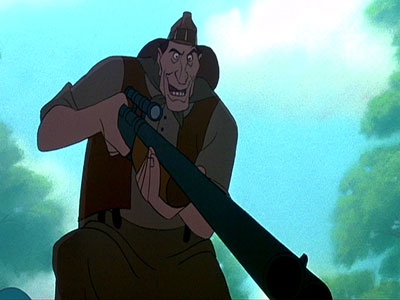 Home, Home on the Range, where the critters are tied up in chains, I cut through their sides, and I tear off their hides, and the next day I do it again! EVERYBODY!

Be aware! The wild is just filled with Evil Poachers willing to murder any human who gets in their way. Poaching means any illegal hunting, but Hollywood poachers only hunt endangered species, such as cute panda babies or meddling kids.

Many Evil Poachers have no motivation to hunt and threaten people other than to be evil. They are like the evil polluters in Captain Planet who never manufacture anything. If Evil Poachers do get a motive, it will probably be selling their prey on the Black Market.

Evil Poachers are Villains By Default in a Kids Wilderness Epic, a genre in which they tend to end up as slapstick idiots dressed in scary animal skins.

In Real Life, most poachers are poor locals trying to get out of poverty; they are unable to afford a license. This is also a major reason why poor poachers will often target endangered animals - the rarity of their parts increases the value. There are some illegal trophy hunters, too.

As an inversion, in older works, fairy tales and Folk Music, you will sometimes see a Loveable Rogue Poacher contrasted against the Evil Fatcat Landowner in a Peter Rabbit-vs-Farmer MacGregor kind of relationship. These are generally from a time when even kids' stories admitted that animals have to be killed for people to eat meat (and this kind of poacher always does hunt for food), and the conflict is more about the morality of claiming ownership of natural resources.

A sister trope to the Egomaniac Hunter. Compare with Cruella to Animals. Contrast the Hunter-Trapper, who hunts and traps legally, and is much more likely to be reasoned with.

Examples of Evil Poacher include:

Ways to tell if someone is a poacher: are they using devices aside from their own Pokemon and a Pokeball? Are they attempting to capture more than one Pokemon of a certain type at a time, outside of a designated Safari Zone? And most obviously, does the targeted Pokemon clearly belong to someone else?
Team Rocket are often poachers, for example in the Safari Zone episode. There were also a trio of poachers that caused Larvitar to be separated from its mom, and the one Team Rocket fought who was capturing Poison type Pokemon in this way Arbok and Weezing were let go to help them when the Pokemon were freed.

Retrieved from "https://allthetropes.org/w/index.php?title=Evil_Poacher&oldid=1823280"
Categories:
Cookies help us deliver our services. By using our services, you agree to our use of cookies.