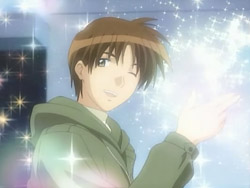 Some people can be sparkly without being undead.

In anime, attractive men and women walk around in a cloud of sparkles. Maybe they're just so pretty that light, like members of the opposite sex (and occasionally the same sex), behaves strangely around them. Maybe Animeland pheromones take the form of glowing, colorful diamonds of light. Nobody really knows.

Or maybe it's just the fact that Generic Cuteness makes it hard to visually show the really beautiful people. Furthermore, this is usually shown when it's the point of view of the person looking at a Bishie, so this is likely to visually convey their inner feelings.

Some more recent examples will employ the Bishie Sparkle out of an intense commitment to irony, or humorously.

Most Western examples have been references to Japanese examples, but with the popularity of Twilight, that might be beginning to change.

The effect also applies to cute couples, including Schoolgirl Lesbians but especially Yaoi Guys. Order Bishie Sparkle today and get a free helping of Love Bubbles.

A Sub-Trope of Everything's Better with Sparkles.

Examples of Bishie Sparkle include: