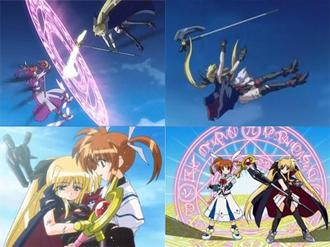 "Nanoha's Guide To Making Friends: 100% Effective Or Your Money Back!"

In a series based around an endless series of one-on-one fights, defeating a Worthy Opponent or The Rival will sometimes convert them to the hero's side, if not always to his cause. Furthermore, no matter how many people the Worthy Opponent has killed, how much grief he has caused, even if he slaughtered helpless children or the hero's own family, as soon as he shows a bit of remorse or goes out of his way to help the hero even once, he will be welcomed into the hero's circle of True Companions with open arms.

It helps if the story is idealistic enough for the hero to forgive the villain after s/he is safely defeated. Correspondingly, the villain in this kind of story is so surprised and moved that the hero would be big-hearted enough to do that, that they have a change of heart.

From the writers' standpoint, this trope is a way to keep characters around longer. If it's a show about fighting, and if the hero is always getting stronger, what's the use of a defeated enemy? We want to see him fight some more, but he can't fight the hero again because that would be repetitive and we all know he would lose. So instead, he becomes an ally and gets to assist the hero.

In video games, this may simply be an instance of the designers wanting to include more Boss Battles; this is even more obvious in several cases where a character is already an ideological ally but wants to "duel" or "practice" against you anyway, or needs to "test your strength" before he'll join up. (Summons love to do this, as do Mons and even warrior tribes.) These fights are, then, essentially Filler. Of course, more Boss Battles are usually what the player wants, as well, so there are rarely complaints.

Compare Kill Me Now or Forever Stay Your Hand, another way to win over your enemies. Also compare Let's You and Him Fight where the two character are heroes who are already on the same side but still fight each other before joining forces, and Fire-Forged Friends, where enemies end up fighting on the same side to become friends. Contrast Villain's Dying Grace.

See also Love At First Punch and Best Her to Bed Her for romantic variations, Defeat Means Playable, I Fight for the Strongest Side.

Examples of Defeat Means Friendship include: