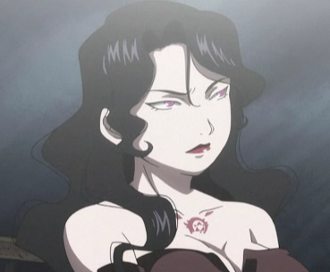 Other factors being equal, evil characters are sexier.

Evil does strange things to people. It can be pleasurable, delicious, or addictive, it can make you more badass, and it even makes you more sexy. Often a consequence of Power Is Sexy, since Mooks aren't that attractive.

Even though Beauty Equals Goodness, some villains are just gorgeous. They ooze sex appeal and carnality in a way that represents how seductive and tempting evil can be. They tend to have looser sexual morals. They are as handsome as they are arrogant (much to the heroes' annoyance). They hide their demonic soul behind the face of an angel. And they're not afraid to use their beauty, wiles, and sex appeal to seduce the hero and carry out their nefarious plans. (Okay, maybe that last Pothole went too far.)

Their outfits tend to show more skin and have more leather, fetishist hangups, lace, on occasion, or even gorgeous and functional Femme Fatalons. Hey, what's the point of being evil if you can't do it with class? Or, failing that, overdo it with, um, style?

A good guy temporarily tempted by evil tends to suddenly wear skimpier clothes and be more sexually assertive. Many fans will find him sexier this way and perhaps dread the return to purity that will accompany his return to goodness.

An opportunity for Fan Service of all kinds. Also sets the stage for Unfortunate Implications, especially given the gender differences it frequently invokes.

This is especially problematic because it is guaranteed to garner loads of entirely undeserved sympathy from fans. Still, it's so ingrained in certain cultures that it's not going away any time soon.

As a trope, understandable. Evil characters are rarely just the type to say, "I choose evil!" (Though even characters who do have that as their motivation may be sexy.) Even if a character has misgivings, the Big Bad should want to be what he or she is...and what better way than to make evil seductive? Storytellers have understood this for millennia.

People have been going a little far with this trope, though. Evil in general is presented as something that is physically enticing. (In American film, this is probably related to that period way back when when only evil was allowed to be sexy—since sex sells regardless.)

This trope is often reconciled with Beauty Equals Goodness by making the good characters' beauty more genuine and the evil characters' appearance more focused on inspiring lust. That is, they consciously try to separate beauty from sexiness. Thus, the hot chick likely was Evil All Along, or has made a Face Heel Turn; the constant heroine, while beautiful, is not sexy because she exudes Incorruptible Pure Pureness even if she's gonna end up a wife and mother.

If the heroine-cum-Love Interest is the initial Ms. Fanservice, then The Baroness or The Vamp has to take it to the next level, sometimes immediately.

The following tropes all relate to this concept; please add examples there rather than here when possible:

Compare with Beauty Equals Goodness. Both a cause of and a result of Jerkass Dissonance.

No real life examples, please; This is an issue wherein discussion about attractiveness and discussion about evil are both involved, and, sometimes, the whole can be more touchy than the sum of its parts, despite combining an insult with a compliment. In any case, Rule of Cautious Editing Judgment should be taken into account here, even for some of the fictional examples.

Examples of Evil Is Sexy include:

Retrieved from "https://allthetropes.org/w/index.php?title=Evil_Is_Sexy&oldid=1967573"
Categories:
Cookies help us deliver our services. By using our services, you agree to our use of cookies.