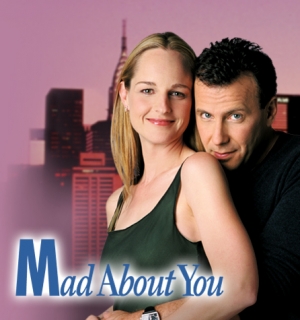 Quite simply, a Dom Com about a married couple, with a Seinfeld-esque interest in meaningless conversations, and minor fiddling events over big important ones. Rather unusual in that the couple is composed of two intelligent, attractive, well-adjusted and financially well-off people who are deeply in love and rarely argue. Except over whether the floor is slanted.

The well of inspiration ran dry in the final season (Viagra overdoses and breast implant jokes abound), but the series managed to wrap up with a truly heart-rending finale.

Their dog, Murray, became an Ensemble Darkhorse due to his phenomenal acting talent.

Tropes used in Mad About You include:

Paul: Ouch.
Jamie: What happened?
Paul: No, no, no, I'm just practicing.
Jamie: Fine. You're gonna fall in a well. Are you happy now?
Paul: You know, I fell in a well.
Jamie: You did not.
Paul: Birthday, 15. Amish country.
Jamie: You fell in a well?
Paul: While making a wish.
Jamie: Okay? My God.
Paul: No, no, no, this is the beauty--this is the beauty of the thing. See, I know it's gonna suck. I know there's some disaster coming and still I continue to have birthdays.
Jamie: Maybe this one will be better.
Paul: Oh, no, no, it will suck. It's just that I just don't know what form the disaster will take and therein lies the fascination.

Jamie: Lisa, this is not Murray! It looks like Murray, but it isn't Murray. Murray has a white spot and vacant eyes. This dog KNOWS THINGS!