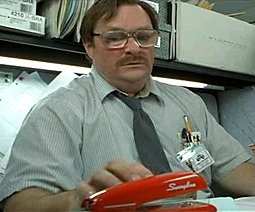 Not even the Apple of Discord could cause such coveting and strife as the Red Swingline Stapler.

The situation where a movie affects or creates a Real Life demand for an object, good or service. This can lead to Defictionalization, where things only start being made due to demand for fictional things. For example, Swingline originally didn't make red staplers; the people who made the film Office Space painted a black stapler red for the film. Eventually can result in a Life Imitates Art situation.

Note that things causing a permanent decline or increase are often urban legends; the influence of a single film is usually temporary.

This is like Product Placement, only practically unintentional. It may even result from a production going out of the way to avoid product placement, such as those using Brand X.

Sometimes known in the UK as The Delia Effect, whereby ingredients and utensils recommended by Delia Smith in her popular cookery shows are subject to increased demand. Cranberries, capers and omelet pans have all been subject to this, though shops have got wise and Delia's publishers tend to let them know what's being recommended this time round. Now known in Australia as The Masterchef Effect for similar reasons... custard apples, anyone?

Note that any basic science course will tell you that correlation doesn't always mean causation, but some of these are some pretty interesting coincidences. When demand appears for something that's never been produced much less demanded until its fictional presentation... it's hard not to attribute a cause and effect.

Defictionalization is when the makers of the piece of media create their own tie-in merchandise based on this concept. If the show is built around this effect, it's Merchandise-Driven.

The equivalent for other works is the Colbert Bump, and if it happens to songs, it's likely Revival by Commercialization.

Examples of The Red Stapler include: