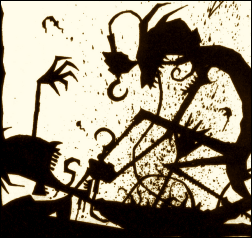 "After a while, all I'm doing is punching wet chips of bone into the floorboards. So I stop."

Bob has been dealt a horrible injustice by Emperor Evulz—perhaps Cool and Unusual Punishment, family murdered, an earlier No-Holds-Barred Beatdown, or maybe Evulz had a fax machine that plain didn't work.

When the time finally comes to deliver justice, Bob pulls out all the stops and attacks Evulz in a rage of melee combat, even though he might have a much more efficient/safe method of attack, and ends up continuing way beyond what is necessary or perhaps even deserved. Often accompanied by Bob screaming, either incoherently or about how much he hates Evulz. Sometimes Bob will list Evulz's crimes in "And This Is For" fashion. He may even try to run him through the said fax machine.

While causing considerable damage and pain for Emperor Evulz, Bob is often hurt by his own fury after he calms down. See also the super trope, No-Holds-Barred Beatdown.

Examples of Extreme Melee Revenge include:

HARTIGAN: EIGHT! LONG! YEARS! YOU! SON OF A! BITCH!

Marv: (asked if killing a helpless old man will give him satisfaction) The killing no. No satisfaction. But everything up until the killing will be a gas. You can scream now if you want to.]]

Mal: Looks like business ain't running so much as crawling away. You wanna meet the real me now?