Out with a Bang 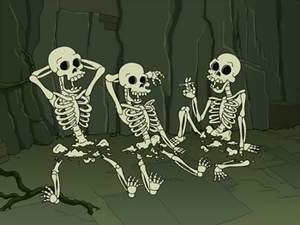 A character having a heart attack and dying during sex, to the embarrassment and mortification of his or her still-living partner. Generally used in comedy (because, unless it's played for laughs, there's nothing pleasant for the person who was with that character at the time). Sometimes they also Go Out with a Smile.

Alternatively, someone may be killed through other means during sex. If it's murder, then the killer may do it to get their jollies, or because that's when their victim's defenses are completely down.

Quite literal Death by Sex. The opposite would be Mate or Die.

Not to be confused with a person blowing themselves up, or with people deciding to make their demise a memorable one.

Truth in Television for some lucky people. Hey, if you've gotta go... That said, No real life examples, please; All The Tropes does not care to squick its readers.

Examples of Out with a Bang include: