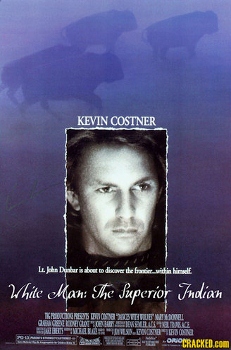 If movie titles were honest

A common trope in 18th and 19th century adventure fiction, when vast swathes of the world were being explored and 'properly' documented by Europeans for the first time, Mighty Whitey is usually a displaced white European, of noble descent, who ends up living with native tribespeople and not only learns their ways but also becomes their greatest warrior/leader/representative. Extra points if he woos The Chief's Daughter along the way; an unfortunately common variation that perpetuates into present-day media is that she will continue to love our hero even if he is directly responsible for the death of her husband, brother or even father.

Sometimes the foreign societies are shown to be realistic, three-dimensional and actually rather pleasant places to live. Indeed, sometimes the native peoples are shown to be better in some way than European society and the white man begins to despise his old home. In modern-day fiction, sometimes the Mighty Whitey is there to lead or inspire the Noble Savages or bring some aspect of modern technology or knowledge to their aid, something they presumably could not do before he showed up. One particular version has it so that the sympathetic Author Avatar whitey is not only now the Great White Hope for the non-white Noble Savages, but is very often defending them from other evil whites.

In modern-day fiction—particularly in Hollywood movies—Mighty Whitey pops up as the result of creative types trying to appeal to as broad a cross-section of society as possible to get their cash back. And since the majority of major Hollywood stars are white Americans (despite the fact that only a small minority of their audiences are Americans at all, let alone white Americans), it's almost inevitable that the all-singing, all-dancing hero is also going to be registering low on the melanin count... which can become a self-perpetuating mess.

Of course, these writers might also just be doing the respectable thing, and be writing what they know. Perhaps not in the 'I'm a badass Adventurer Archaeologist' sense, but the 'I'm used to the cultural norms of my race/gender, and would be terrified of offending people with incorrect cultures cues' sense. See Jive Turkey as well.

Remakes of shows/movies with the original trope often subvert this; for instance, making the Mighty Whitey into a dunce, and their Ethnic Scrappy sidekick into a smart, street-savvy Badass. Sometimes this goes a little too far. This trope can also occur as an unintended side effect of writers trying to show the equality of all races and cultures—in a tone-deaf and more than potentially offensive kind of way.

Non-American media, such as anime, can exhibit versions of this trope tailored to their home audiences. But Not Too Foreign is often used as a way to set up this version of Mighty Whitey.

Can be a Justified Trope as it did happen in real life. Explorers from a more advanced civilization had access to education, technology and general skills and experience that a native who never traveled further than the neighboring village didn't. Especially as only those who were already among the strongest and bravest in their home countries did have the courage and motivation to become explorers in those dangerous times.

Examples of Mighty Whitey include:

Retrieved from "https://allthetropes.org/w/index.php?title=Mighty_Whitey&oldid=1922684"
Categories:
Cookies help us deliver our services. By using our services, you agree to our use of cookies.