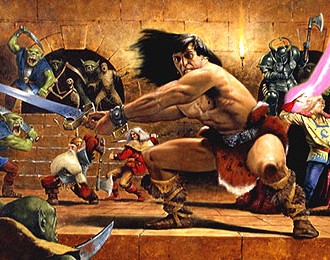 For some heroes, this is all the armor they need.

In essence, a Loin Cloth is lower body underwear made of cloth or hides. Sometimes it's just a flap over the crotch and rear, and sometimes it's woven like actual briefs.

Often some cultures, especially stereotypically primitive ones, have this as the only form of clothing. But one of the most prominent appearances in fiction is the fantasy Barbarian Heroes, even though they come from the north, where it's really cold. Sure they wear these made of fur, and perhaps they dress better when actually in their northern homelands, but otherwise this is a form of Impossibly Cool Clothes. Is frequently used as a male instance of Stripperific outfits.

May occasionally be justified, if the barbarian from the Grim Up North actually complains about the sweltering heat of the southern lands he's exploring, and refuses to wear more for this reason.

Quite often overlaps with a (Walking) Shirtless Scene. Sometimes the wearer Does Not Like Shoes. Also can be worn by women, either with or without a matching bikini top.

Examples of Loin Cloth include:

Retrieved from "https://allthetropes.org/w/index.php?title=Loin_Cloth&oldid=1855400"
Categories:
Cookies help us deliver our services. By using our services, you agree to our use of cookies.