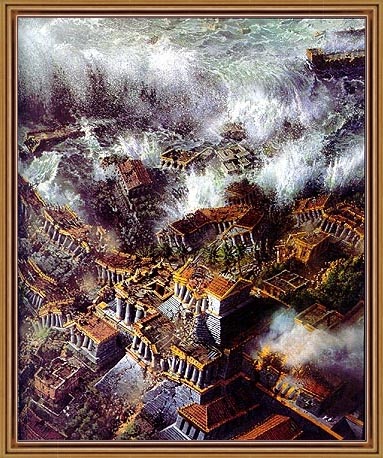 The fabled lost Utopia, often described as sinking due to man's hubris and descent into decadence. A common setting with many interpretations, and some times just generally used as a stock setting for fantasy and speculative fiction stories. Generally it's an Advanced Ancient Acropolis chock full of Functional Magic, and/or Lost Technology. Aliens or Google Earth may also come into play.

It doesn't necessarily have to be Atlantis per se to tap into the myth fabric of the setting, but it can be any sort of lost civilization that had great achievements and then were mysteriously lost. Other examples include Mu (Pacific Ocean), Lemuria (Indian Ocean) or Thule (Arctic Ocean)...heck, even "Antediluvia" (literally, "Land Before The Deluge"), in Christian settings. Often the capital city of the Precursors.

Due to the connection with the city being an island that sunk, mermaids are often connected to it. Such as the people of the city surviving by learning to breathe water really quick in the Underwater Ruins, even rebuilding them into an Underwater City.

Historically, "Atlantis" draws on ancient myths from various cultures, but the main details are drawn from Plato's dialogues Timaeus and Critias, where it is a Fictional Counterpart for Athens, used as a template for his vision of the ideal society. In this original version it was an all-conquering empire only successfully resisted by his ideal Athens, which was destroyed in the same cataclysm.

Unfortunately, if it's under the sea, it will be less interesting than it sounds.

Examples of Atlantis include:

Retrieved from "https://allthetropes.org/w/index.php?title=Atlantis&oldid=1767309"
Categories:
Cookies help us deliver our services. By using our services, you agree to our use of cookies.