A Child Shall Lead Them 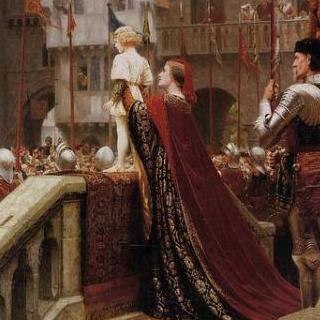 Youthful rulers are common in literature and history. If children, they are depicted as adorable; if in their teens or twenties, they simply create a sense of awe and protectiveness in their older advisers. Their naive simplicity may in fact make them good (and sometimes ruthless) rulers, as they prefer to cut through the red tape of court etiquette.

Because of their youth and inexperience, they are often underestimated by the villains, who are frequently Evil Uncles/Chancellors/Princes who were responsible for the assassination of the previous ruler, are currently in control, and do not intend to give it up. If the Queen Mother is regent, she is likely to over-control the young monarch and be unwilling to put down her power, though she is less likely to be actively evil.

They usually exhibit great wisdom in the course of the story, thus justifying their enormous power despite their youth. They may have friends (or adventures) among the servants or guards, giving them an insight into the lives of their subjects that their stuffy courtiers would scorn. They may have to resort to King Incognito to get anything done. Rebellious Princesses sometimes become good examples of this trope.

May stem from the parent's having refused to leave In Its Hour of Need. (The child may have attempted to do the same, but forced to do so.)

Compare Royal Brat. Young Conqueror, The Wrongful Heir to the Throne The Evil Chancellor etc. may actively try to encourage this, and the young ruler must shake them off. The corporate version of this is the Grade School CEO, the petty leader Young and in Charge. If the entire government is children, not just one ruler, you're looking at a Teenage Wasteland.

Examples of A Child Shall Lead Them include:

Retrieved from "https://allthetropes.org/w/index.php?title=A_Child_Shall_Lead_Them&oldid=1630177"
Categories:
Cookies help us deliver our services. By using our services, you agree to our use of cookies.